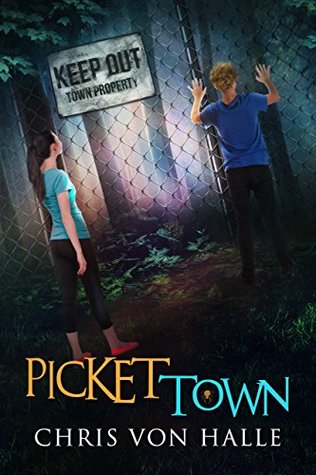 Don’t go into the woods…
Just when twelve-year-old Amanda’s town couldn’t possibly get any more boring, a bacterium breaks out. The disease only affects kids, giving them cold-like symptoms and a ring of gross, purple sores on their foreheads. Even more disturbing, none of the infected have returned from the hospital.
Meanwhile, Amanda drags her wimpy friend Sam along to explore the woods near her house. They stumble on what appears to be a spaceship in a clearing, but before they can begin to wrap their minds around that bizarre and eerie discovery, something flies out of the ship. Something they couldn’t possibly ever expect. Something far more terrifying than they ever could’ve imagined.
And something that poses a major threat to not only their town, but the entire world.

Imagination teams up with science fiction adventure for a mystery with unique twists and turns.

Amanda is bored out of her gourd, mostly because Picket Town never involves anything exciting. Except for a new disease, that is. Kids are dropping from school like flies thanks to a mysterious disease. In an attempt to find some sort of adventure, Amanda convinces her best friend, Sam, to climb a fence and explore the forbidden forest. There they discover a UFO. And that's where the real excitement begins.

This was an enjoyable science fiction read with just the right amount of mystery, thrilling moments, and several unexpected surprises. The first chapter begins with a fairly normal school setting, allowing readers to grasp somewhat familiar moments before heading off into fantasy. And there is tons of imagination in these pages. With well done descriptions, which are detailed yet kept brief enough not to ruin the flow, the author creates a vivid world and scenes.

Amanda is a very determined character, who lets her mouth get the best of her as well as her spontaneous decisions. Her personality is balanced out with the more careful one of Sam, making them a great duo. In other words, friendship is key.

The plot moves along quickly, and while some surprises are fairly easy to see coming, others are unexpected. The first chapters dive in to the situation almost too quickly, but later on, the story grabs. There are several logic stumbles and holes intermixed with the adventure. Many of these find their solutions toward the end. And this isn't an ending to expect! It's an easy read which leaves no room for boredom, and will even interest more reluctant readers with the short length. This isn't a deep read but concentrates on aliens, rapid adventure and science fiction fun.

Chapter One
An Irritating Bacterium

Mr. Garrison walked to the front of the class, put his briefcase on his desk, and drilled everyone with a gaze way more intense than usual.
I shuddered at my desk in the third row. I knew that look. He had news, all right. Big news. And I was pretty sure I already knew what it was.
"Good morning, everyone," he said in his calm voice. Kind of ironic because of his extreme face, though he always talked like that no matter what mood he was in. His huge body towered over the class like a tsunami about to crash.
“Morning,” a couple kids said. Others just grunted.
Mr. Garrison adjusted his thick-framed glasses on his wide nose. “Before we begin, I would like to announce that Zack Goldman has come down with the purple circle, and, therefore, has been transferred to Sedgewick Hospital for treatment.”
Yep. Just like I thought. The room’s temp seemed to drop even more, like someone just cranked the AC up to full blast. I wrapped my arms around my body, but it didn’t make me any warmer.
Not that Mr. Garrison’s news was all that much of a surprise, though. Zack had been coughing and sniffling ever since homeroom. And his symptoms kept getting worse. By lunch, his face even looked like it belonged in a wax museum, his eyes all red and puffy.
Yeah, he’d definitely been coming down with something. But it was the sores that made my lunch want to come back up and say hello again—the real tiny, purple sores that formed a perfect circle on his forehead, like they always did on people infected with the creepy bacterium. I’d only noticed the freaky little things because I’d been waiting in line behind him at the water fountain in the hallway right after lunch. When he’d gotten his fill, he turned around and nodded weakly toward me, basically saying, “It’s your turn to lick up some purple circle germs I just left on the fountain, Amanda. You know, so you can get sick with the nasty bacterium along with me.”
Yeah, right. Like I was going to do that.
“Umm… Naw, I’m good,” I said a little too quickly. “Turns out I’m actually not all that thirsty. Thanks anyway, though.” And I spun around and left.
Okay, it’d been a bit awkward, but what else could I have said after seeing those horrible little buggers up close? And they were real shiny, too, like they wanted to announce to everybody that they were officially here, like they wanted to let everyone know the purple circle had gotten Zack and the rest of us kids at New Pines Middle School were next. Maybe even all the kids in the whole town.
I shivered at my desk, my history book already open to the Lewis and Clark Expedition chapter since we’d been studying their voyage out west. Those tiny, purple sores were the only real sign you had the purple circle. At least, that’s what the news was calling the creepy bacterium nobody had ever seen before that had suddenly swept our small town, bringing all its victims to the hospital.
Mr. Garrison opened his mouth to say more, but my best friend Sam shuddered so violently in his desk next to mine that his chair’s legs vibrated loudly against the floor.
Every head in class snapped toward him, including mine.
“S-Sorry,” Sam said. “The purple circle k-kind of freaks me out.”
Aw. Poor guy. He was so scared he was in full-on stuttering mode. Not that it took much to trigger that.
A couple snickers broke out in class.
“Wimp,” Alex Watson’s slightly nasally voice muttered from the desk behind mine. The stupid bully was always giving Sam a hard time about being scared of stuff. And being scrawny, too.
I whipped my head around. “Shut up, Alex! The purple circle is a seriously creepy disease and you know it. Stop being such a jerk all the time.”
“Oh—I’m a jerk all the time, am I?” Alex tilted his freckly, pig-nosed face at me, an ugly scowl pasted to it.
“You’re not only a jerk all the time, you’re the biggest jerk in the whole—”
“Stop it right this minute, you two!” Mr. Garrison snapped in a loud, stern voice.
I bit my tongue and turned back around, even though I would’ve kept railing on that stupid, bigheaded Alex Watson all day if I could.
Mr. Garrison dug his sharp gaze at me then Alex.
We both kept quiet.
Mr. Garrison looked at Sam, his eyes softening. “I can see how you could find the bacterium a tad unnerving, Sam. However, there is absolutely no need to worry whatsoever. Zack will be completely fine and he will return to school as soon as he has been effectively treated.” He smiled warmly as he looked at the whole class. “Just like the others currently afflicted with the irritating bacterium.”
Irritating bacterium? Irritating bacterium? How could Mr. Garrison call a brand-new bacterium that doctors had never seen before and that nobody had recovered from yet—including the kids who’d had it for a whole month since it broke out—irritating? 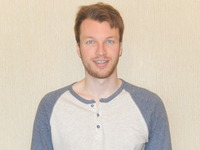 Chris von Halle has had many different lives in many different worlds—the near and distant future Earth, other planets, and even other dimensions—and his books recreate his childhood memories of such outlandish locations. In this world and life, he lives in Ridgewood, New Jersey, and enjoys such extraordinary activities as playing videogames, tennis, and basketball, and writing the occasional comic strip.