Review: Gen One by Amy Bartelloni 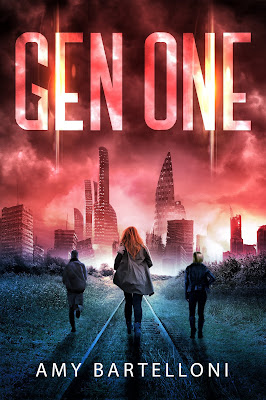 Generations after robots conquered Earth, the remaining population survives in the ash of their defeat. Within their walls in Authority City, bots test and develop super soldiers. Rumors of horrible experiments are enough to keep humans in line. At least, most humans.
Eighteen-year-old Delilah O’Connor scavenges the ruins with her friend Zane, and Gen, a generation one bot they repaired off the grid. Gen’s curiosity gives Delilah hope for the future, but not enough hope to go against the Authority. She finds Zane’s dreams of a human resistance pointless, and it’s enough to keep their on-and-off relationship mostly off.
When they discover two dead guards in a shady trading stop known as the Banks, everything changes. Framed for the murders and pursued by Authority bots, Zane takes Delilah to the only safe space he knows—the headquarters for the Human Coalition. Even there Zane isn’t safe. When he’s captured, Delilah and Gen must join an unlikely alliance of bot and human to go in to Authority City and save him before he becomes another casualty. Things in Authority City aren’t as they seem, they’re worse. And Delilah might lose more than her friend within its walls.

While the idea of robots taking over humans might seem regurgitated, this book takes some interesting and very unique spins.

Delilah and Zane have been best friends for as long as Delilah can remember, and Gen, one of the first AIs, is almost like a sister to her. Together, they search for what they can find in the ruins to sell for things they need. Since the robots took over, life for humans hasn't exactly been easy. On their way to sell that day's goods, the authorities start to hunt them down thanks to a huge secret Zane has been keeping from Delilah. Soon, Delilah finds herself in the most dangerous spot she could be, at the headquarters for the Human Coalition...the rebellion. And it's too late for her not to fight for humanities survival.

The world building in this book draws in right away and holds the entire way through. It's easy to fall into the ruins as the main characters search for valuable objects, and intriguing to dive into the market and the surrounding industrial areas. The descriptions are brief but well done enough to let the smell, feel, and taste of the world come to life. It was simply fun to dive right in.

As to the characters, there is a nice array of personalities. Even the side characters have their own stories, making it easy to cheer for several of them. But, of course, Delilah, holds center stage. She's spunky but not overly so, brave yet not careless and caring. Although she comes across a little naive in the beginning, she grows right along with the circumstances and holds her own while still remaining believable. She's a character to root for on every page.

Many layers of secrets and intrigue hide behind the rule of the robots, and there are some unexpected twists which change the entire view on the book near the end. It's intriguing and opens the question as to when an AI is more than just a machine.

While the plot is engaging, the writing sometimes misses a bit on flow, which could have made it really sit. Certain aspects come a bit suddenly and hiccup, while others are a little repetitive. But it's still an interesting read. Science fiction fans will enjoy diving into this world. 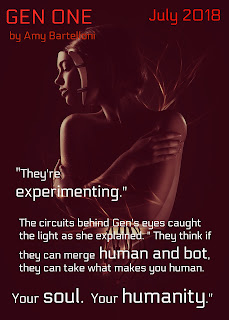 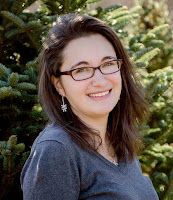 Amy Bartelloni is a reader, writer, coffee addict, & musical lover who lives with her husband, 3 children, and various animals in the northeast US. When she's not playing mom-taxi, you can find her with her nose in a book or her head in the clouds. A people watcher and science fiction junkie, she still believes dreams can come true. The author of the Andromeda series with Limitless Publishing, (Andromeda, Orion's Curse, and the Scorpio Project), and contributor to Prep for Doom, Tricks, Treats, and Zombies, and 13: Resurrected, some of her favorite authors include Neil Gaiman, Jasper Fforde, Paulo Coelho, and Stephen King.

Gen’s shoulders slumped.  “Biological experiments.  Merging humans and robots.  Creating, essentially, a new species.  Delilah...”  She looked up and met Delilah’s eyes. She had always thought it was hard to read Gen’s emotions.  Her engineering made it possible for her to cover what she was thinking, but not now.  Fear was written all over her face.  Gen even paled.  When had that been added to her programming? “They’re experimenting with souls.  They think if we can merge human and robots, we can take it from you, somehow.  Souls.  Humanity.”
The look of abject misery on Gen’s face was more than Delilah could bear.  She walked back to the table, angled the wiggly chair so she was sitting right across from Gen, and sat down so close their knees touched.
She knew the debate.  According to the stories, it was one of the reasons for the bots and humans to go to war.  That bots weren’t real.  That they were a construct, and thus, had no soul.  The fact that the new bots were all attached to a central command, so to speak, made them mindless machines.  But they didn’t have to be.  Gen was proof of that.  She took Gen’s hand and curled their fingers together.  There was no difference. Flesh was flesh.  Born, or created.
“You have a soul,” Delilah said, quietly.  She’d never come out and said it, but she knew it in her heart to be true.  Gen was as much a person as she was.  The realization had come on her slowly, after living with Gen and seeing the bot learn to handle human emotions: anger, pride, even love.  These last few days had cinched it for her.
A single tear streamed down the bot’s cheek, it’s salty makeup configured so as not to affect her systems.  Gen pulled her hand back and wiped it.  “We don’t even know if you have a soul,” the bot joked, the humor returning to her eyes.  It was true, no matter how many experiments they did, the idea of a soul was theoretical, at best.  No one could prove or disprove it.
“Gen,” Delilah leaned in, “whatever it is that makes us human.  You have it.  I’m not sure why the bots are trying to experiment with humans when they had it right the first time.  Your independence.  Your curiosity.  Your sense of right and wrong.  Your spirit of adventure.”
Gen made a noise somewhere between a laugh and a hiccup, and Delilah continued.  “And I consider you more than a friend.  You’re a sister.” They both stood and Gen pulled her into a hug.

Email ThisBlogThis!Share to TwitterShare to FacebookShare to Pinterest
Labels: Amy Bartelloni, Dystopian, Gen One, Robots, YA Science Fiction, YA SciFi