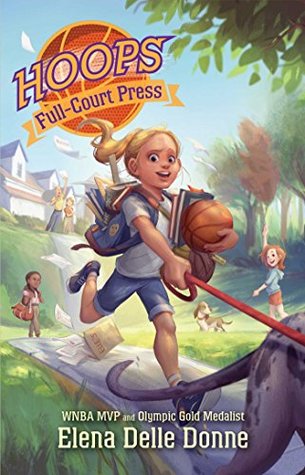 
From 2015 WNBA MVP, 2016 Olympic gold medalist, and global ambassador to the Special Olympics Elena Delle Donne comes the second novel in a brand-new middle grade series with as much heart as there is game.
When the basketball team is invited to have a service day at the school-affiliated after-school program, Elle falls in love with working with kids with special needs. So she begins to volunteer on two days a week when she doesn’t have practice and makes new friends there.
Now, Elle finds herself juggling her new passion, basketball obligations, and schoolwork. But when her grades start to slip, she’s going to have to make a tough decision.
Can Elle really do it all? Or will she find herself being pulled in too many directions?

Elle and her friends are back with more sports, fun and a wonderful dog, who makes life more stressful than Elle imagined.

With the dance behind her, Elle is ready to hit school and basketball. Unfortunately, things aren't moving that smoothly yet. Her coordination is causing problems and she finds herself in a new slump. She's began volunteering, too, but between that and a new dog, she finds herself under a time crunch. School isn't running as great as it should either, and she's finding it almost impossible to spend time with her sister. Somehow, she's got to figure everything out or might just drown in her schedule.

This is another lovely book in the Hoops series. Elle loves sports and basketball holds a star spot in the tale. The court moments are true to life and feel like home to basketball fans. But this isn't only about sports. Elle is as active in sports as the rest of her life. The moments at school come across natural, and the time with her family is inspiring as well as natural. Add the fun moments with a great dog, and it's a wonderful, well-balanced mix.

The added dash of her volunteering and working with special needs children throws in a nice touch and wakens understanding as well as awareness for this area. It's obvious that the author has experience in this area, and she brings the moments across nicely.

This is a short read, which makes it great for the intended age group and reluctant readers. Girls, who love sports, will dive right into the pages and enjoy the familiar situations. The writing is smoother than in the first book, but it still is directed for the slightly younger end of the middle grade group, making it a better read for ages 7 to 10.

Elena Delle Donne has been a professional women's basketball player since 2013, when she was selected by the Chicago Sky second overall in the WNBA draft. She was the 2015 WNBA MVP and won the gold medal with the USA's women's basketball team in the 2016 Olympics. She is the global ambassador for the Special Olympics and became the first national ambassador for the Lyme Research Alliance. Elena also plays host to De11e Donne Academy, a basketball camp that runs throughout the year, where she mentors and coaches girls ages seven to eighteen. She now plays for the Washington, DC, Mystics.