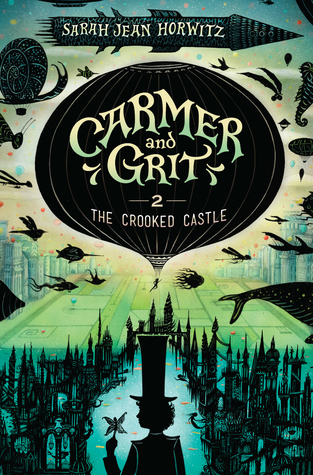 
Magician’s apprentice Carmer and one-winged faerie princess Grit investigate a mysteriously magical flying circus in the follow-up to “a fun and frolicking middle grade adventure full of enough fantasy, humor and heart to make giddy even the most finicky reader.” (BookPage)
Shortly after saving the faeries of Skemantis, magician’s apprentice Felix Carmer III and his faerie companion, Grit, head out to see the world. They soon come across a mysteriously magical flying circus. As they get to know the outlandish world of Rinka Tinka’s Roving Wonder Show, it becomes clear there’s something not quite normal about this circus or its inventor—and that recent airship disasters plaguing nearby Driftside City may have a sinister explanation.
Fans of the Wildwood trilogy and Lockwood & Co. series will love the thrills and chills of The Crooked Castle as it takes readers up in the air with a flying circus, under the sea to the evil Unseelie kingdom, through a terrifying magical snowstorm, and on a chase with the menacing Wild Hunt.


I did not read the first book in this series, which didn't prove a problem. But I'll definitely be going back and reading it (and highly recommend starting off with book one) simply because this is such an amazing story!

When a balloon and it's rider crash into the roof, Carmer (a tinkerer) and his best friend Grit (a fairy princess) discover a glider in the wreck with an invitation to a flying circus. The two quickly discover this isn't an ordinary flying circus and fear that there might be some evil plans behind the mysterious magic connected to it.

This is sold as a read for the middle grade audience, and although fitting to the age group, it's a book which will thrill even older readers. The author does a fantastic job at bringing this magical world with steampunk elements to life. It is rich and detailed and a sheer fantasy delight. By no means does it ever talk down to readers, bur rather pulls them up into an intricate world.

Carmer and Grit make a delightful combination. While Carmer is a young inventor who keeps his head pretty much on the ground and focused, Grit follows the heart and dreams. She's a fairy princess, but by no means glittery and full of pink puffiness. She's sweet but like her name, full of grit. Simply the fact that Carmer helped her replace a lost wing through his mechanics and then the fairies  added their own magic, demonstrates the closed connection and harmony these two have. The friendship isn't perfect but golden.

Dull is not a word to describe this tale. There are wonders, action, magic, evil plans, dangerous situations and adventure the entire way through. Every page shines with imagination and lures deeper into the fantastical world.