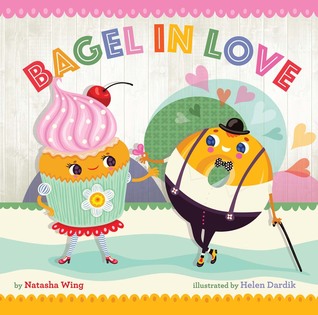 Poor Bagel! He dreams of entering the Cherry Jubilee dance contest . . . but no one wants to be his partner! Can he find a sweet-tart who doesn’t think his steps are half-baked?
Bagel loved to dance. It made him happier than a birthday cake! And more than anything, he wants a partner who will spin and swirl, tap and twirl with him in the dance contest. But Pretzel sniffs that he doesn’t cut the mustard, Croissant thinks his moves are stale, and Doughnut’s eyes just glaze over. Can a cute cupcake save the day for our would-be Fred Éclair? Witty and pun-filled, this picture book really takes the cake.

This sweet read swirls with tap dancing delight and leaves behind glaze of warmth and happiness.

Bagel loves to dance and would like nothing more than to entire the Cherry Jubilee dance contest. But he doesn't have a partner. His toes might be talented, but finding a willing partner turns out to be an almost impossible quest. As the time to the contest nears and no partner is to be found, he's afraid he might be forced to give up on his dream.

This book made me smile. At first, I wasn't sure really what to expect—a bagel in love is a quirky concept—but it was a sugar-sweet delight. Bagel is a funny chump, self-assured and a dancing pro. As he gets denied by alluring eclairs, salty pretzels and fancy donuts, it's hard not to feel sorry for him. He may not be as fancy, but he doesn't deserve it. Young readers will notice this and sympathize with his little bagel heart (if bagels had one) and be elated right along with him when the ending finally brings the happiness he deserves.

The illustrations are bright and fun. Each yummy character brings across personality and easy for young listeners to identify. There's even a few exotic treats thrown in to expand horizons and give the book a more worldly atmosphere. The text runs along as smoothly as a song with making it easy to read aloud. Add the dash of sparkles on the cover and again on the last page spread, and this book glistens with sugary happiness. There's a message as well, and it doesn't stick out straight but rather rolls along on the emotions and leaves a lasting impression: stick to being you and chase your dreams even when others put you down.

My kids absolutely adored this book and grabbed it up more than several times.

Natasha Wing is best known for her paperback series based on the popular poem "The Night before Christmas." The Night Before Kindergarten has sold more than 1.5 million copies and has regularly appeared on bestseller lists since its publication in 2001 (Grosset & Dunlap). Wing is also the author of Jalapeno Bagels (Atheneum), An Eye for Color: The Story of Josef Albers (Holt), and When Jackie Saved Grand Central (HMH Books For Young Readers). Natasha lives in Fort Collins, CO and is available for interview. Learn more about her at natashawing.com.


Helen Dardik illustrates for a large number of clients, including American Girl, the Boston Globe, HarperCollins, Klutz, Parents Magazine, and Penguin UK. Helen lives in Canada. Learn more about her at orangeyoulucky.blogspot.com, and visit her on Instagram at @helen_dardik.