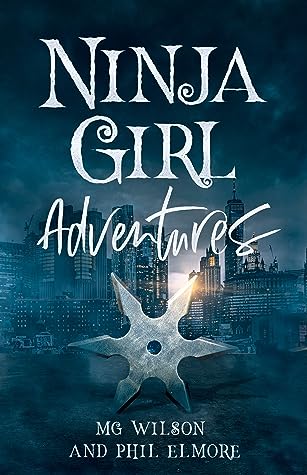 I recommend this one for middle graders, too—ages 9 and up.


Sister Power at It's Best

Moira Mackenzie is just 14 years old. Her sister Mindy is 15, and their younger sister Marci is 9. The girls have lived their lives until now believing their father, Scottish billionaire Stephen Mackenzie, is simply a businessman whose KogaTech Consolidated (KTC) is the world’s most successful technology company. Their father was married to a Japanese woman, Kameko, whom the girls are told died in a car accident.

The girls' idyllic existence in New York, where KTC headquarters is located, is shattered when their father disappears. He is legally declared dead by their Uncle Jiro Akiyama, Kameko's brother. Uncle Jiro wants to possess the company for himself. What he doesn’t know is that Stephen Mackenzie changed his will so that Moira inherits the entire corporation.

An overwhelmed Moira must contend with the unraveling of her family. She has the help of Morton Gerardi, Stephen Mackenzie’s best friend, but he’s not the girls’ father and there’s only so much he can do. While Mindy rebels and Marci, a child genius, disappears deeper into her computer, Moira is further frightened by an intruder who invades the girl's Manhattan apartment. Not long after this, Moira is visited by Uncle Jiro himself, who offers to provide for the girls financially as long as Moira signs the company over to him.

Moira considers giving in but doesn’t. Suddenly, out of nowhere, black-clad figures, who can only be the mythical ancient ninja of feudal Japan, attack the Mackenzie sisters. The girls are saved by an elderly Asian woman who heads a ninja clan of her own. That woman removes her face mask to reveal that she is Aiko Akiyama, the girls’ grandmother. Moira immediately has many questions. Why has Aiko only now revealed herself?

Aiko explains that Kameko, as Aiko before her, was a member of a Koga ninja clan of Kunoichi -- a female ninja. Aiko was forced to fake her own death because of Jiro’s ambitions. She vows to teach Moira to become a ninja warrior and fulfill her family destiny. As Moira beings to learn the ways of the ninja, Aiko’s Yoda-like lessons give her greater self-confidence as well as physical martial arts skills. She passes these lessons to her sisters... but there’s more. Legends claim the ninja were shape-changing tengu, forest spirits with magical powers. Aiko reveals that these stories are true. If Moira wishes, she can learn these mystical abilities. Jiro himself can become a wolf and other ferocious beasts. Moira can learn these same skills, just as Aiko has.

As Moira trains and learns more about herself, she helps her sisters to grow more confident and more disciplined as well. Soon, Mindy is using her gymnastics skills to have ninja-style adventures of her own, as genius Marci helps both of her sisters using her knowledge of computers.

As they grow in their abilities, the girls uncover a plot by Uncle Jiro to misuse “sleep learning” technology developed by KTC. This is why Jiro wants the company. He believes the technology can be used to control minds, ultimately giving him control over the city -- and perhaps, one day, even more than that. As the girls use their new abilities to chase down clues that point them to Jiro’s sinister ambitions, Jiro grows tired of holding back. He instructs his ninja to kidnap Mindy and Marci. He then tells Moira she has no choice but to sign KTC over to him if she ever wants to see her sisters again.

To get her sisters back, Moira will have to face her greatest fears. With only partial training, she must conquer her own doubts and apply the lessons of empowerment and confidence that Aiko has given her. The story climaxes in a battle between the two rival ninja clans wherein Moira must first save her sisters and then defeat Jiro himself. The fate of New York City hangs in the balance, as does the fate of Moira’s family and of her father’s company.

BOOK DEPOSITORY / AMAZON / GOODREADS / B&N / KOBO
MY TIDBITS
I picked this one up thanks to the title because...ninjas??? Yes, please! If you're looking for one of those 'usual' ninja stories, this is not it. This one is better. It incorporates a...aehm...fairly normal girl and thrusts her into a corporation war, which also centers around a ninja clan war. And it's a lovely mix.
Moira is fourteen. Her mother died in a car accident not very long ago, and now, her father has perished under very strange circumstances. She's left with her two sisters (one older, one younger) and the father's best friend, who they refer to as their uncle. While the multi-billion corporation her father built and headed should go to the brother of her mother...a man they never met but already runs a huge corporation of his own...things take an unexpected twist, and Moira finds herself in charge. But if she thinks her mother's brother is going to let things rest and be, she's wrong. He's going to rage war, and it's not the kind she'd ever dream it would be.
The blurb on this one sounded fantastic. And it is. You do have to suspend a bit of logic and realistic thinking because this tale does shoot out in several directions, which aren't to be explained in the real world. In other words, don't think too deep. Seriously. Don't. But this doesn't have to be logical because it is a fantastical, exciting and fun ride into fiction. The two sides are wealthy beyond anyone's dreams, ninja skills are inherited, and magic is less than a breath away. Plus, there's girl power and some great messages for the age group included.
Moira, although super rich, comes across as a very normal, down-to-earth girl. Readers will wish they could be in her shoes and jump into the adventure with her. Not only does she have to tackle how to lead a super massive company at the age of fourteen, but she's learning super ninja skills, saving her sisters, and unweaving very sinister plots and secrets. Simply put, it's a fun, fast paced read.
I'd even recommend this one for middle graders. Actually, I'd almost recommend this one more for middle graders than young adults. The writing isn't as deep as often found in young adult reads, and there isn't anything content wise, which steers against middle graders. But no matter the age, if you're looking for an easy read adventure, this book is one to grab up.
on December 04, 2020