Review: Lulu Llama and the Triangle of Drama by Kim Linette

Today's review comes from a series, which won the Moonbeam Best Series Award...and deserves it (in my opinion). The EQ Explorers series is designed "to educate and inspire" and bring across the "powerful principal of happiness and emotional awareness". And these do...but honestly, I just enjoyed the cute adventure and fun illustrations (I'm not only centered on 'depth' when it comes to kidlit).
Since I've been honored to receive several titles in this series, I'll be presenting them one by one over the next couple of months. This one...being about a llama...is my daughter's absolute favorite. 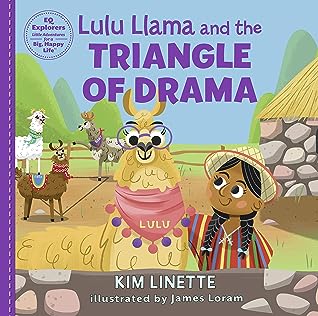 LULU LLAMA AND THE TRIANGLE OF DRAMA
EQ Explorers
by Kim Linette
Illustrated by James Loram
Kapalua Cove, LLC
Picture Book
48 pages
ages 4 to 8
With a trio of high-drama llamas as friends, how will Andi have any fun?Stuck doing chores on her family’s llama farm, Andi longs to have more fun. She tries to befriend a trio of llamas, but she quickly gets caught up in the triangle of drama caused by Bully Bart, Victim Viv, and Fixer Fred.It’s only with the help of another, wiser llama—Lulu—that Andi begins to understand the drama-free truth.This story centers around the powerful EQ principle: Choose to be Drama Free.It's a lesson in emotional intelligence that is essential for every child.Get to know the entire EQ Explorer's Series—including how we donate 100% of profits to help underserved kids around the world!

GOODREADS  / AMAZON / EQ EXPLORERS
MY TIDBITS
Llamas fans will love the different personalities and llama drama packed into these pages...and even find a bit of wisdom along the way.
Andi has been helping feed and take care of the llamas for many years and is a little sick and tired of cleaning up after them and all of the other worked involved. When she decides to have some fun and play with them, she discovers three llamas off to the side. But they aren't having fun; they're arguing. Soon, she's introduced to the 'drama llamas', a certain sort of llamas, which engage in drama all over the world. Although she wants to help them bring an end to their drama, she might find herself stuck up in their never ending triangle herself.
I'm usually skeptical about self-help books or ones which are on a mission to teach a lesson. This book, however, manages to balance the realm of fun and messages splendidly. Readers/listeners will like Andi from the first page and completely understand her frustration. Taking care of animals isn't always fun. As she ventures across the drama llamas, the humor rolls in and is sure to have listeners nodding but also smiling and giggling, too. These llamas pack tons of personality, quirks and are definitely anything but boring.
The illustrations are very well done. Each llama's personality radiates from the page and even displays extra visual traits to make things fun. The emotions are portrayed clear on the expressions. Also, the illustrations clearly show the triangle between the three llamas (it never disappears), and this subtly reinforces the main message.
As to the main message...it's more than clear. The idea of how to avoid drama is very distinctly and bluntly restated at the end of the story. On the last page, there is also a list of several things a person can do to avoid the 'drama llama triangle'. So, it doesn't end only in this lane, though, the author also throws in a list of llama facts.
In other words, this is a lovely book for llama fans and a wonderful way to bring across the message about avoiding drama and how, maybe, to even assist others when they find themselves caught in the triangle.

And here they are...
The Author
Kim Linette is the mother of six wonderful children and an entrepreneur at heart. She founded Kapalua Cove Foundation, a non-profit organization dedicated to empowering underserved children. She is the author of  EQ Explorers, a children's book series designed to inspire children to live big, happy, emotionally healthy lives. Raised in Southern California, Kim Linette now splits her time between Alpine, Utah and Lahaina, Maui.
The Illustrator
James Loram is an illustrator based in South West England. He attended Plymouth University where he received his BA (Hons) in Illustration. James specializes in children's book illustration, and his work has been feature in numerous galleries and publications throughout the world.