Review: Nick Muffet and the Silver Coffin by Paula Berinstein 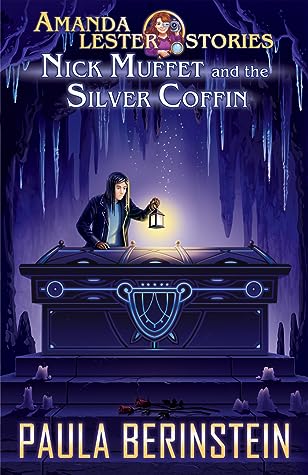 Beware of making promises to Sherlock Holmes . . .After promising Sherlock Holmes he'd look after his descendants, accidental time traveler Nick Muffet discovers he's spoken too soon: from his vantage point in the twenty-first century he can find no trace of Holmes's child with the cunning actress Irene Adler. His only option is to return to the past and look for himself.But time travel is risky and Nick fears he might inadvertently cause a disaster. Still, a promise is a promise. Against his better judgment he commandeers Simon Binkle's time machine and returns to 1890.Unfortunately his search for the elusive offspring leads nowhere and he becomes increasingly desperate. At a loss, he realizes there's only one strategy left to him, and it's fraught with peril. He must seek out Adler herself.Securing a job at the theater where she's appearing, Nick finds himself in the perfect position to observe the actress. But Adler is not the type to make things easy, and his distance is soon compromised. That's just the beginning of his problems though. It seems Adler is involved in much more than just acting, and Nick is in far more trouble than he ever imagined.

BOOK DEPOSITORY / AMAZON / B&N / GOODREADS
MY TIDBITS
I've read almost every single one of the titles in this series and never grow bored of the adventures. This one concentrates on Nick...one of my favorite character.
One of my favorite things about this series is the mix of genres. It's always a surprise as to what direction the tale will take and imagination flows freely. The stakes are always high and the twists and turns fresh. Yet, it always holds to the mystery end of things and ties in Sherlock Holmes in some way or another. It's an original mix with characters to love and adventures to get lost in.
This tale isn't any different as Nick finds himself trying his best to keep a promise to Sherlock Holmes. As if the promise is a chore in itself, Nick has to battle other unexpected problems, which make it almost impossible to keep his promise. Of course, danger is only a step away and the solution is almost impossible to find.
In other words, this is already the tenth book in the series, and I'm not nearly bored of it yet.