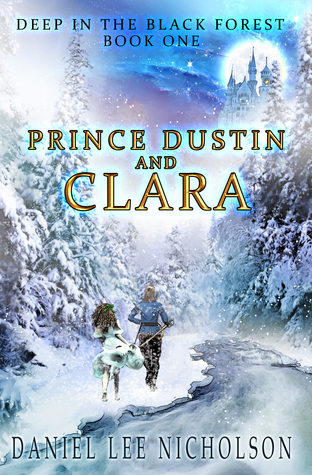 To escape the wrath of Egon, Clara finds herself Deep in the Black Forest. It is a world of mystery and magic; creatures and animals, fairy tale princesses, and a Snow Queen. Prince Dustin, the Nutcracker Prince, is determined to protect Clara from Egon. Vicious and vile, Egon is not far behind and determined on getting revenge.
Clara, a sweet and timid 12-year old, soon discovers that her uncle is a wizard in this far away land and that he is at the center of the chain of events. This thrilling fantasy adventure re-tells the story of the fairy tale, The Nutcracker, taking the reader along for the ride…a classic for all seasons!

With all the magic of the Nutcracker, this tale pulls into an exciting adventure.

Christmas is approaching, and Clara can hardly wait. Her younger brother might be up to his pranks, and the whole household is a bustle, but when her uncle arrives with his presents, the magic begins. Clara finds herself transported to the deep woods of the Black Forest and to a world which can only exist in wonderful fantasy.

This is a retelling of the Nutcracker, and although there are original twists in this tale, the basic story line glistens through. Clara is 12-years-old and fairly mature for her age. She's timid, well behaved and adored by all. When she heads out into adventure, her warm heartedness and true bravery make her a lovely heroine who is easy to cheer for and love. Her relationship to the Prince sits with a mix of emotions, remaining in the style of the original tale. There's sprinkles of strong friendship, hints of a possible future romance, and even a dash of motherly protection and childlike awe. It hits the beauty and newness of a girl this age perfectly and makes Clara a beautiful character in so many ways.

The first chapters switch between scenes and various characters' points of view as two worlds, one of fantasy and the other more realistic, are introduced. This isn't the simple opening up into Clara's dreams, but a step between two realms. Each has history and purpose, and each is as real as the other. This foundation laying made the first chapters jostle around and came across unsettled as well as a little confusing. When the Christmas party finally takes place, the plot finds it's pace and the story draws in, making it hard to put down. Clara comes across several exciting and original adventures, which keep the tension high and exciting. Still, the beauty of the Black Forest and its fantasy inhabitants come to life through rich, but never boring descriptions. There are even several scenes where the more musical aspects leave their mark, and the beauty of he ballet plays in as a gorgeous backdrop. Despite all of this, the writing does stumble at times and breaks jostles out of the world for a second. Still, it wasn't enough to set the book down. The story, in general, is so engaging and inviting that it's hard to leave Clara until her adventures find their end.

Especially fans of The Nutcracker are going to want to grab this one and get lost in Clara's tale. Since this is the first book in the series, there's a promise of more to come—and I can't wait to see where the story goes from here.

Egon, spewing and cursing, trampled through the halls of the Castle of Bosartig. He was rage walking. All the mice in the kingdom that saw him from a distance backed off and quickly fled the other way, probably hoping they had not been spotted. Those less fortunate, quickly learned the folly of being in the path of a mouse gone mad.
Egon had already given orders to have all the mouse soldiers ready by the time he made it to the front of the castle.
The mouse soldiers were lined up row by row by the time Egon made it out to the castle’s courtyard. Many gulped when Egon appeared.
“Mice!” Egon bellowed.
“Yes, King Egon.” The mouse soldiers shivered as they quickly knelt in unison.
King Egon thrust his sword in the air above his head. “We are on our way to the Ice Palace. Nordika thinks her army can protect Dustin and that young girl. Can she protect them?” Egon said with an evil laugh.
The mouse soldiers said nothing. They hung their heads low.
“You!” Egon hollered as he pointed to one of the mouse soldiers up front. All heads immediately turned. Some mice could be heard sighing with relief. Egon was not speaking to them.
The soldier Egon pointed out quickly ran forward. Directly in front of Egon, he knelt down on one knee and bowed his head. “Yes, King Egon,” he said meekly, almost in a whisper. Tears could be seen welling up in the soldier’s eyes.
“I remember you from our last battle,” Egon continued as he walked from side to side with his head held high.
The poor mouse soldier softly responded, “Yes.”
“Stand and look behind you!” Egon ordered while he thrust his sword into its holster.
The mouse soldier jumped up and looked at the rows of mouse soldiers still kneeling with their faces partly lowered.
“Now, tell me what you see.”
The mouse soldier looked perplexed and gulped. In a shrill and confused voice, he responded, “Mouse soldiers?”
Egon walked from left to right and templed his sharp claws, tapping them together in front of his chest. “Yes, mouse soldiers,” he affirmed in a commanding low voice. “And none of those faces will be here tomorrow if we don’t get that girl and Dustin by the stroke of the next hour.”
Egon then charged forward. The mouse soldiers followed quickly behind him. Their long tails swished from side to side, leaving marks in the snow.