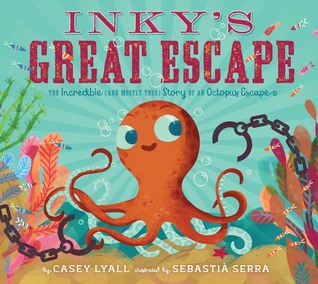 
Inky’s Incredible Idea for an Ingenious Escape .
Based on a true story, this tale follows a daring, Houdini-esque octopus as he performs his greatest escape act yet.

In April 2016, The New York Times published an article about an octopus named Inky who escaped from the National Aquarium of New Zealand through a drainpipe and into the sea. In this charming fictionalized account, Inky, worn out from his exciting life in the ocean, has retired to the aquarium. There he quietly plays cards, makes faces at the visitors, and regales his tankmate Blotchy with tales of his past adventures. Then Blotchy dares Inky to make one more great escape: out of their tank. Will Inky succeed?


Inky was once a great octopus escape artist, but decided to take a rest and live in the aquarium, where he tells his best friend Blotchy about his adventurous tales. But after listening to the stories time and again, Blotchy wonders how many are really true—if any of them. Inky will prove that he is indeed the greatest escape artist and plan the biggest escape of all time.

Inky is an octopus to love. Pride and joy radiate off of him on every page, and even when Blotchy admits that he doesn't believe all tales, Inky doesn't splash a wave of negativity. Instead, his adventurous spirit breaks free and his determination becomes contagious. He's an octopus to cheer for from beginning to end, and proves that everything is possible. It only takes a few things: patience, determination and some laid out work (through plans, in this case).

The illustrations are bright and bold, allowing the ocean life in its vibrant variety to come across with tons of glory. Inky, with his lovely orange, is hard to miss and demands attention. The illustrations allow the story to come to life, and there are little details young listeners are sure to want to discover time and again.

Text mixes with the illustrations, allowing the story to sink in and yet, remain easy to read. There are a few guaranteed giggles here and there,and a couple higher level vocabulary terms dot the text, just the right amount to not throw readers off but to allow them to learn a word or two. It's a fun, active story which rolls along nicely. While being warm and encouraging, the ending does leave with a hint of melancholy, which will have readers wondering a little but also lead their imaginations to spin about the outcome.

Casey Lyall is a writer from southwestern Ontario. She works at her local library where she runs a number of teen groups and waits for management to discover they're actually paying her to have fun. She is the author of Howard Wallace P.I. and Shadow of a Pug: Howard Wallace P.I. 2 (both Sterling).

All about the Illustrator. . .
Sebastia Serra hails from Barcelona, Spain, where he studied fine arts at the Universitat de Barcelona. He is an award-winning illustrator whose work has appeared in magazines and on television. Sebastia has illustrated a number of picture books in Spain and in the US, including A Pirate's Night Before Christmas and A Pirate's Twelve Days of Christmas by Philip Yates. His work has also been displayed in exhibitions all over the world, including the US, Italy, Japan, China, and Korea.