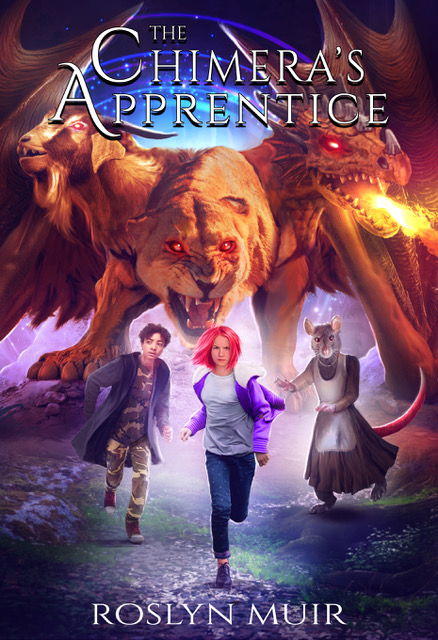 
Walking talking rats aren’t real, right? After Kyra is transported from Earth to another world, Antiica, she’s thrust into her father’s war with the rat people, the Raturro, and must save her kidnapped mother. Kyra sets out on a dangerous journey to rescue her and is aided by Coyne, a teen who deserted the army and Mercy, a teen rat girl who was once Kyra’s childhood friend. But it’s Kyra’s new bond with the Chimera, a magical creature that travels through stone, which changes her life completely. The Chimera’s Apprentice is the story of a girl and her monster and a desperate search for her family.

MY TIDBITS
This is a fast paced novel, which leads to an intriguing world of rats, magic and more.
Kyra might have taken things to far with her school project, when she brought live rats along. But her suspension from school is the least of her problems. Her father left years before, and although her mother insists there's no way to reach out to him, Kyra still wishes he'd come home. When a very strange encounter in the laundry room is followed by an attack on her mother, Kyra's father does finally return...but it's not in the way she'd always hoped for. He's there to take her to her true home—a realm where magic exists, and a horrible war rages against the rats. To make matters more complicated, thanks to a bracelet her mom gave her, she's now expected to take over the throne. But Kyra is determined to free her mother from the rats. Even with two friends on her side, it's a bigger adventure than she could have ever dreamed.
When I started reading this one, it reminded me a bit of Gregor the Overlander. The first scene grabs with the ridiculous situation of bringing live rats to school as an extra to a project (the main character wanted to leave an impression). The excitement takes off from there and doesn't stop from until the last page. It's an edge-of-the-seat race the whole way through. Kyra barely has a second to breathe as she finds herself in the middle of a war in a realm, which she's supposedly to rule. Being told it's her true home doesn't make anything easier. It's a lot for her to wrap her head around, but she doesn't even get time to do that as danger and evil wait at every bend.
Kyra is an interesting girl, who shows her quirks even during the first chapter. She deals with things as best she can, has tons of loyalty, and despite mistakes, has a heart of gold. She's a heroine to root for, and doesn't have to go things alone, either, thanks to her friends. It's a fun tale, which lets kids' imaginations take flight, while letting the adrenaline flow.
I enjoyed this read quite a bit and found the combination of magic and rats intriguing and refreshing. I do wish the author had spent a bit more time bringing the world to life as well as setting the stage for Kyra's 'normal' life a little more first. Still, this one grabs and races forward from the fist sentence and misses out on that end more than once. But action fans (me) will adore it because it's definitely a fun read.
on December 14, 2020