Mommy and Daddy's Day with a Review: The Road to Woop Woop by Eugen Bacon with Giveaway!

Every so often on Bookworm for Kids, I have a Mommy and Daddy's Day because parents like to read too! Usually, I try to stick to books which don't need to be hid under the bed. This one doesn't necessarily need to visit those dark shadows (and dust bunnies), but it does contain several tales with more pointed material. It's not every tale and not overly packed, but I'd be wrong not to mention it.

Anyway, this book is a short story collection from an African Australian author, who ignores rules and borders in writing when she believes they block the purpose of writing—to bring across certain thoughts and emotions. It's quite the collection of unexpected moments and tends toward the darker side. But go ahead and read my thoughts for yourself, take a sneak peek below and you won't want to miss the $50 Shopping Spree giveaway at the very end. 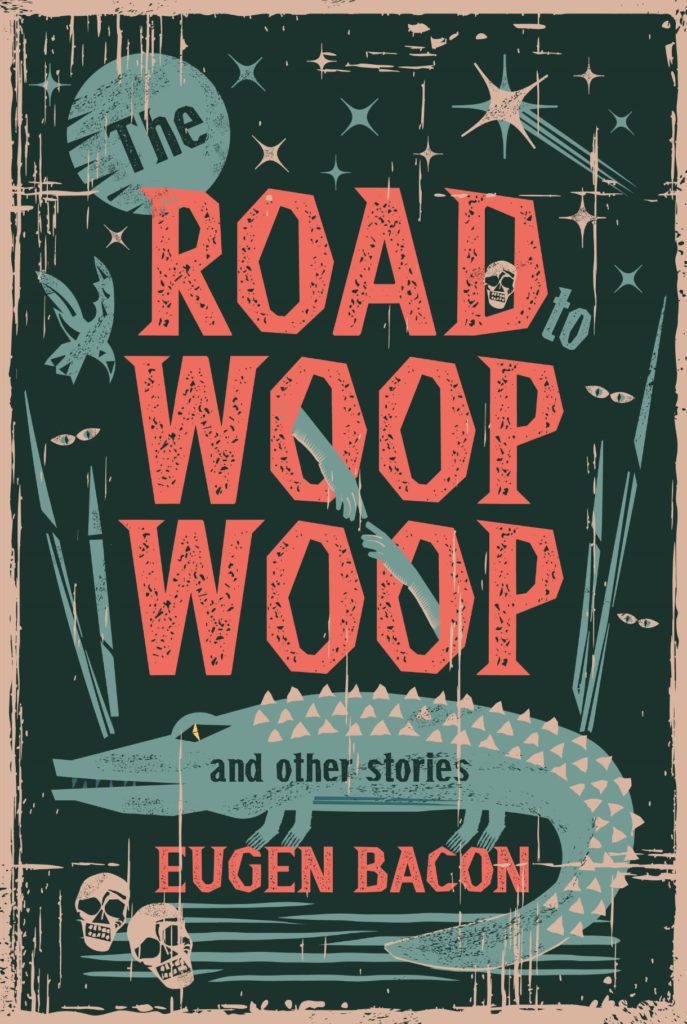 THE ROAD TO WOOOP WOOP
and other stories
by Eugen Bacon
Meerkat Press
Collection / Speculative Fiction / Dark Fantasy
192 pages
Eugen Bacon’s work is cheeky with a fierce intelligence, in prose that’s resplendent, delicious, dark and evocative. NPR called her novel Claiming T-Mo ‘a confounding mysterious tour de force’. The Road to Woop Woop and Other Stories imbues the same lushness in a writerly language that is Bacon’s own. This peculiar hybrid of the untraditional, the extraordinary within, without and along the borders of normalcy will hypnotise and absorb the reader with tales that refuse to be labelled. The stories in this collection are dirges that cross genres in astounding ways. Over 20 provocative tales, with seven original to this collection, by an award-winning African Australian author.

Woop Woop is Australian slang for nowhere or a distant little town, which lays out of the way. I'm going to guess the author was going for the later, since these stories take one in unexpected directions.
There are 20 short stories in this collection, each one ranging in length and style. Some are lyrical, some traditional, and other exploratory. The author loves to march to her own beat and reach beyond the usual borders, and these tales do just that, while incorporating bits and pieces (or sometimes more) of Australian lore, myths and the like. Some are magical. Some are simply provocative, but every single one is original and leads down unexpected paths in strange directions...like a road to woop woop.
Like with all collections, there were some tales I enjoyed and some which simply weren't my thing. There is an underling thought to each of these, making them anything but light, quick reads. Whether they are worth the time to contemplate or not is something the reader will have to figure out for themselves. The author definitely stretches in various directions and lays more on the darker side of things. A few themes head toward being harsh and seductive, while others simply surprise and teeter toward odd. The author definitely gets kudos for letting her words fly in whatever way she sees best to get across certain emotions and ideas. And I can respect that even if I'm not a fan of every turn she takes.
It's well written and does provoke thought. The tales definitely steer clear of the usual market and add some fresh air to the reading pile. Fans of short stories which tend to the darker side, and those ready to stomp down a new direction will enjoy traveling these various paths and end up somewhere or even nowhere at all.
And here she is...

Tumbling down the stretch, a confident glide, the 4WD is a beaut, over nineteen years old.

The argument is brand-new. Maps are convolutions, complicated like relationships. You scrunch the sheet, push it in the glovebox. You feel River’s displeasure, but you hate navigating, and right now you don’t care.

The wiper swishes to and fro, braves unseasonal rain. You and River maintain your silence.

“When’s the next stop?” River tries. Sidewise glance, cautious smile. He is muscled, dark. Dreadlocks fall down high cheekbones to square shoulders. Eyes like black gold give him the rugged look of a mechanic.

You don’t respond. Turn your head, stare at a thin scratch on your window. The crack runs level with rolling landscape racing away with rain. Up in the sky, a billow of cloud like a white ghoul, dark-eyed and yawning into a scream.

A shoot of spray through River’s window brushes your cheek.

“You ask me-e. Something bothering you?”

He gives you a look.

Classic, you think. But you know that if you listen long enough, every argument is an empty road that attracts unfinished business. It’s an iceberg full of whimsy about fumaroles and geysers. It’s a corpse that spends eternity reliving apparitions of itself in the throes of death. Your fights are puffed-up trivia, championed to crusades. You fill up teabags with animus that pours into kettles of disarray, scalding as missiles. They leave you ashy and scattered—that’s what’s left of your lovemaking, or the paranoia of it, you wonder about that.

More silence, the cloud of your argument hangs above it. He shrugs. Rolls up his window. Still air swells in the car.

He flexes long corduroyed legs that end in moccasins. Flicks on the air button—and the radio. The bars of a soulful number, a remix by some new artist, give way to an even darker track titled ‘Nameless.’ It’s about a high priest who wears skinny black jeans and thrums heavy metal to bring space demons into a church that’s dressed as a concert. And the torments join in evensong, chanting psalms and canticles until daybreak when the demons wisp back into thin air, fading with them thirteen souls of the faithful, an annual pact with the priest.

Rain pelts the roof and windows like a drum.

He hums. Your face is distant. You might well be strangers, tossed into a tight drive from Broome to Kununurra.

The lilt of his voice merges with the somber melody.

You turn your face upward. A drift of darkness, even with full day, is approaching from the skies. Now it’s half-light. You flip the sun visor down. Not for compulsion or vanity, nothing like an urge to peer at yourself in the mirror. Perhaps it’s to busy your hands, to distract yourself, keep from bedevilment—the kind that pulls out a quarrel. You steal a glimpse of yourself in the mirror. Deep, deep eyes. They gleam like a cat’s. The soft curtain of your fringe is softening, despite thickset brows like a man’s. You feel disconnected with yourself, with the trip, with River. You flip the sun visor up.

Now the world is all grim. River turns on the headlights, but visibility is still bad. A bolt of lightning. You both see the arms of a reaching tree that has appeared on the road, right there in your path. You squeal, throw your arms out. River swerves. A slam of brakes. A screech of tires. Boom!

The world stops in a swallowing blackness. Inside the hollow, your ears are ringing. The car, fully intact, is shooting out of the dark cloud in slow motion, picking up speed. It’s soaring along the road washed in a new aurora of lavender, turquoise and silver, then it’s all clear. A gentle sun breaks through fluffs of cloud no more engulfed in blackness. You level yourself with a hand on the dashboard, uncertain what exactly happened.

You look at River. His hands . . . wrist up . . . he has no hands. Nothing bloody as you’d expect from a man with severed wrists. Just empty space where the arms end.

But River’s unperturbed, his arms positioned as if he’s driving, even while nothing is touching the steering that’s moving itself, turning and leveling.

“Brought my shades?” he asks.

His glance is full of impatience.

You sink back to your seat, unable to understand it, unclear to tell him, as the driverless car races along in silence down the lone road.