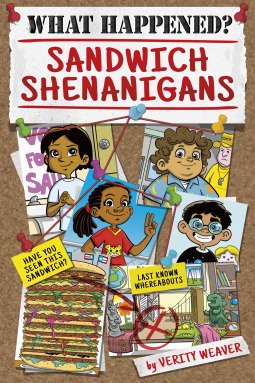 
Sam Witt’s sandwich was a marvel on a plate. The sandwich to end all sandwiches. If life were a movie, there’d have been trumpets and drums playing as Sam paraded his delicious STEAM fair project into class. But not more than two hours after the breathtaking wonder’s arrival at school, the king of all sandwiches was missing.

Was it taken hostage by a jealous rival? Swallowed by a runaway tiger? Beamed up to space by alien invaders? Polished off by a rogue substitute teacher whose eyes were bigger than her poor groaning belly? Or was it something else entirely . . . ?

Crack open a What Happened? book to investigate a preposterous mystery from four different perspectives. See what the witnesses get right . . . and what they get hilariously wrong. Bet you’ll never guess what really happened!

Solving mysteries takes on an entirely new angle—a bit chaotic, tons of humor, and lessons about life along the way.

Everyone is supposed to bring in their chosen project, and Sam Witt's just happens to be a gigantic sandwich. But while everyone is out of the room, the sandwich disappears. Four kids recount their mornings in hopes of figuring out who took the sandwich. Maybe it was a tiger or aliens or a very hungry creature or something else? It's not an easy case to solve.

This is a fast and furious mystery, packed with fun, imagination and excitement. The initial crime, the disappearing sandwich, is presented in the first chapter. After that, four different characters give their recounts of their mornings...each one very different and each one at certain times. In some ways, it reads like four interviews of suspects, but without the serious atmosphere and a ton more adventure. Each character has a wild imagination and shoots off in completely new directions. The reader is encouraged to figure out what they think happened, and then the true culprit is revealed in the last chapter.

This is a very quick, easy, energetic read. Each of the characters bounces off the page and draws the reader in, so boredom doesn't even get a chance to grow. While it's funny to accompany each character as they recount their take on the situation, there's also some important messages woven in about caring for others and being mindful of those around you. But these aren't preachy and stay below the main plot fun.

There are illustrations sprinkled in, and each chapter not only starts with the time and name of the character, whose story is being told, but also with a quick illustration of them. This keeps confusion at bay and offers a nice change-up from the text. But then the writing is never boring, anyway. The thoughts of the character spill forth without pardon and add tons of humor. There are quite a few sounds (crack, boom, etc) which almost give it a comic feel. It's a mystery which even reluctant readers will enjoy. And it definitely keep the reader guessing until the very end.