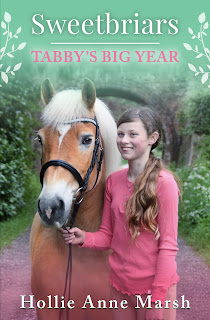 After Tabby’s father vanishes, a deep rift develops in Tabby’s family. Tabby’s mother is focused on being a star performer in her pharmaceutical sales career, while Ava, Tabby’s older sister, is living with grandparents in Cornwall. Tabby feels neglected by her mother and jealous of Ava and although outwardly diligent and responsible, she’s like a kettle about to blow its top… bottling things up until it’s nearly impossible to keep a lid on her frustration and sadness.

Tabby finds solace with her best friends Cate and Violet at Sweetbriars Farm where she is nursing her dream horse Bliss back to peak performance, to be able to participate in the try-outs for the British Young Riders Squad.

Tabby also finds herself facing other challenges – saving her beloved horse Nancy from the knacker’s yard and finding the courage to tell her friends the truth about her family.
Will Tabby be able to save the horses she loves and be brave enough to tell people how she really feels?


This excerpt is from chapter five, where Sophia, the neighbour of the Sweetbriars farm invites Tabby (the protagonist) to her rundown strange house. Sophia is quirky and a bit of an enigma and many readers found her fascinating in the first book. In this chapter, we get to see inside of Sophia’s house and meet her mum, Patricia again. Tabby didn’t have much of a friendship with Sophia in the first book, but in the second book she finds she has more in common with her that she ever could imagine…

They were standing on Sophia’s front porch, in front of them was an old wooden door with cracked cream paint. Sophia turned her key in a brass lock, then she found another key on her keyring to open a lock below that. Then she bent over and used another key to open a bolt at the bottom!
“You can tell he owns a hardware shop right,” said Sophia as she rolled her eyes.
They walked up a carpeted hallway and the walls were lined with crocheted wall hangings. A delicious smell of baking hung in the air.
They turned into the lounge where Sophia’s mum was sitting on the sofa knitting. She was wearing her pyjamas and the television was on. Tabby was surprised to see she was home after opening so many locks. Not only that, she was wearing her pyjamas and it was only five o’clock.
There was a large sofa covered with a colourful knitted throw, an overstuffed green velvet chair and a glass coffee table stacked high with magazines. An exercise bike was wedged awkwardly between the window and the sofa. On the walls were more crochet hangings, along with a photo of Sophia and her mum, both wearing huge grins and Sophia was a toddler.
“Oh hello dear,” Sophia’s mum Patricia said, looking up from her knitting. She smiled at Sophia and then looked somewhat startled to see Tabby. “I didn’t know you were going to bring a visitor home,” she said somewhat sheepishly. For a second her round cheeks flushed pink and her grey eyes looked lost in thought.
Tabby thought that maybe she was embarrassed, being in her pyjamas, and inched back towards the hall wondering if she should leave.
“Please come in,” Sophia’s mum said standing up. “Perfect timing – I have just baked fresh ginger biscuits. Would you like some with a cup of tea?”
“Oh yes please,” replied Tabby. Her tummy was grumbling as she’d not eaten much all day.
“Mum’s ginger biscuits are the best,” Sophia said.
“OK my dears, I’ll bring it into your room Sophia.”
Tabby’s curiosity was piqued. She had met Sophia’s mum once before at the Sweetbriars Christmas party but didn’t know her very well.
Sophia’s mum walked off to the kitchen, her loose slippers flapping on the floor and then she paused, “By the way darling, I saw you from the window riding that horse – how brave!”
Sophia grinned and said, “Thanks Mum, I had the best time!”
“That is wonderful. Don’t worry about your stepdad. He’ll be complaining about something else by the time he gets home from the shop,” she said and they chuckled.
As the girls walked towards Sophia’s bedroom, Tabby noticed the strangeness went beyond the lounge. In another hallway, there was peeling wallpaper, cat dishes dotted around and there seemed to be more rooms but the doors were shut.
“We use those rooms for storage. Full of stuff from our old lives,” explained Sophia. Tabby realised they were the rooms that she had seen boarded up from the outside.
The house was bigger than it looked from the outside, and it seemed there were interesting things to look at everywhere. They walked past a dining room and inside was an antique wooden table with large ornate old-fashioned chairs. At the head of the table on the wall, was a family portrait of the three of them; Sophia in between her mum and stepdad. They weren’t smiling in this one. There was also a Christmas tree with ornaments, even though it had been months since Christmas.
“It’s up all year – Mum just takes the ornaments off in the Spring,” said Sophia rolling her eyes and grinning.
Sophia ushered Tabby to her bedroom where the first thing Tabby spotted were dolls placed on the window sill. They were mostly old fashioned dolls with life-like hair, eerie rolling eyes and they were dressed in fancy outfits from exotic countries. An Asian style doll took pride of place on Sophia’s bed, resting against some pillows.
Tabby recognized the doll as Sophia used to keep it in the basket on her bike; one of the first odd things Tabby had noticed about her. In recent months she hadn’t had the doll and Tabby had forgotten about it.
“My auntie and my mum give them to me,” Sophia explained and shrugged. She picked up the Asian one and hugged it, then said, “Still their little girl” in a high pitched girly voice. “Seriously though, I love these dolls. They remind me of fun times when I was little. Before my stepdad,” she continued drily.
Tabby noticed a large poster above the bed showing a palomino horse galloping through an uber-green meadow.
“Do you like it?” asked Sophia her green eyes wide. Before Tabby could answer she said, “I bought it from the newsagents after I fell in love with Odette, Cate’s horse.”
“Of course; it’s beautiful,” replied Tabby flashing her a smile of encouragement.
In the corner Tabby saw the most modern thing in the house so far – a sleek Apple computer screen sat on a modern white desk. Tabby remembered how much Sophia loved her smartphone and had it with her always.


All about the author!!!


Hollie Anne Marsh is an Australian author who lives in Barcelona, Spain with her partner, baby boy and horse Frieda.

Hollie has been horse riding since she was a little girl, enjoying activities such as Pony Club, showjumping, eventing, and trail-riding in the great Australian bush. Hollie lived in England for almost ten years where she had two horses and trained them for dressage.

The Sweetbriars series is inspired by all the special moments Hollie spent with horses - good, funny, and challenging moments!

Additionally the 'coming of age' and 'growing up' experiences that Hollie had.
Hollie hopes that readers will be able to identify with the characters, find the books fun to read, and they will help readers learn more about horses. 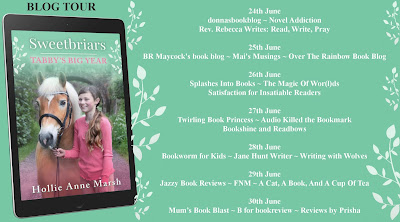