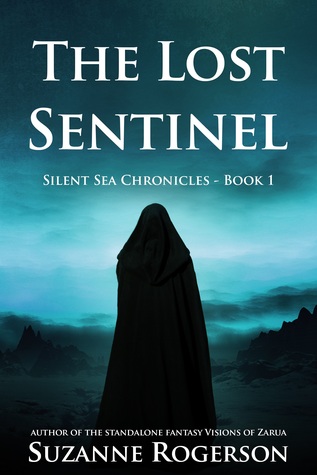 The magical island of Kalaya is dying, along with its Sentinel.The Assembly controls Kalaya. Originally set up to govern, they now persecute those with magic and exile them to the Turrak Mountains.Tei, a tailor’s daughter, has always hidden her magic but when her father's old friend visits and warns them to flee to the mountains she must leave her old life behind.On the journey, an attack leaves her father mortally wounded. He entrusts her into the care of the exiles and on his deathbed makes a shocking confession.Struggling with self doubt, Tei joins the exiles search for the new Sentinel who is the only person capable of restoring the fading magic. But mysterious Masked Riders are hunting the Sentinel too, and time, as well as hope, is running out.Against mounting odds it will take friendship, heartache and sacrifice for the exiles to succeed in their quest, but is Tei willing to risk everything to save the island magic? Follow Tei’s journey through the magical land of Kalaya and the Astral Plane in The Lost Sentinel - Book 1 in the Silent Sea Chronicles.

For the duration of the blog tour all books in the Silent Sea Chronicles series are 99p!

Magic, fear, and an exciting adventure make this a read fantasy friend's are not going to want to miss.

Tei is the daughter of a tailor, who has the ability to enter the astral plane. This, however, must remain a secret, since the other people in the town would never understand her magic. One day, her father tells her they must flee since they've been found out, and the village is no longer safe for her. While traveling, her father is injured and leaves her in the hands of strangers. There, she finds herself on a quest to find the new sentinel before the island dies.

The world building is well done in this book and allows the reader to gently drift into the surroundings, while keeping the tension high. Danger hits Tei from the first page on, making sure the tension sits high right away. Told from multiple points of view, the tale soon takes on several layers, which give the plot richness and depth. The changing of views allows the reader to sink not only into the story, but creates an understanding of what is going on.

While the plot is well woven, the characters weren't quite as deep as I'd hoped. While I enjoyed Tei, I found it hard to connect to her at times and felt as if she was always an arm's reach away. Still, it was an exciting read, and I have no doubt that fantasy fans will enjoy getting lost in this world and will look forward to reading the rest of the series. 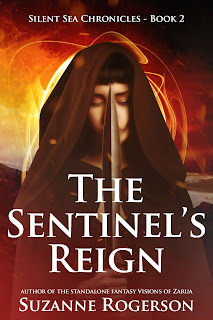 The Sentinel’s reign is doomed to failure unless Tei can prevent the Kalayan people from plunging into war.

With the new Sentinel initiated and the magic restored on Kalaya, life is flourishing for Tei and the exiles. But Rathnor’s plans for war soon escalate and thwart any chance of peace.

Brogan’s position on the Assembly is uncertain as rumours circulate that he is an exile spy.

After an attempt on his life, Farrell is more determined than ever to build a home for his people on Stone Haven. But the council have their sights set on Kalaya and Farrell struggles to steer them from war.

As trouble brews within and outside forces gather against them, can the exiles keep their hold on the magic, or will this spell the end of Kalaya and its people? 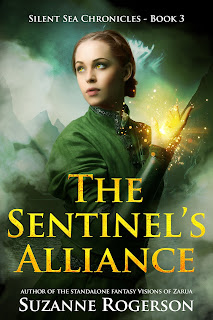 Can new alliances save the islands of the Silent Sea from the murderers stalking their shores?

As the island of Kalaya and its people recover from civil war, a new threat surfaces. Invaders from the island of Elkena hunt the seas, butchering those who possess magic. Their scar-faced captain seeks the Fire Mage who it has been foretold will kill him and Tei and her people are in his warpath.

Tei and a band of Kalayans travel to Stone Haven, the home of their new allies, planning to restore magic to the dead island. But the Stone Haven Council have abhorred magic since their people were massacred by Elkenan invaders twenty years before. Commander Farrell must persuade his people to accept magic again, but his plans expose them to their biggest fear and he risks leading Tei and her people into danger, and jeopardising the safety of both their islands.

Under Farrell’s guidance treaties are forged, but is the newly formed Silent Sea Alliance enough to defeat the invaders and stop their bloodthirsty quest to destroy magic forever?

The Sentinel’s Alliance is the final book in the Silent Sea Chronicles trilogy.

Suzanne lives in Middlesex, England with her hugely encouraging husband and two children.

She wrote her first novel at the age of twelve. She discovered the fantasy genre in her late teens and has never looked back. Giving up work to raise a family gave her the impetus to take her attempts at novel writing beyond the first draft, and she is lucky enough to have a husband who supports her dream - even if he does occasionally hint that she might think about getting a proper job one day.

Suzanne loves gardening and has a Hebe (shrub) fetish. She enjoys cooking with ingredients from the garden, and regularly feeds unsuspecting guests vegetable-based cakes.

She collects books, loves going for walks and picnics with the children and sharing with them her love of nature and photography.

Suzanne is interested in history and enjoys wandering around castles. But most of all she likes to escape with a great film, or soak in a hot bubble bath with an ice cream and a book. 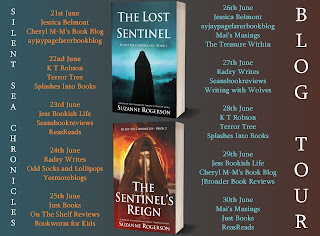