Review: The Extraordinary eTab of Julian Newcomber by Michael Seese 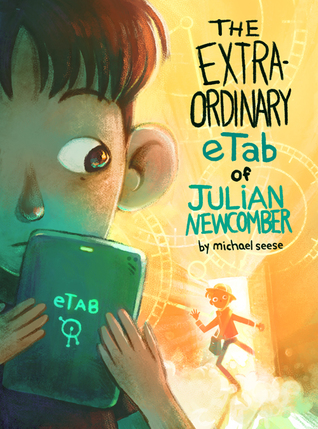 Twelve-year-old Julian Newcomber knows he has a fitting--what the smart folks call apropos--last name. His family moves constantly due to his Dad's quirky inventions, which have a habit of misbehaving and blowing up the family home. So he's always been the new kid in school. Now firmly settled in a peaceful and close-knit community, Julian believes he's finally found a home, not to mention a safe haven from his father's calamities. That is, until a vaguely familiar 20-year-old man walks out of the bedroom closet, and identifies himself as future Julian. It turns out that his father's latest contraption, the eTab, alters time. So Grown-Up Julian decided to take a joyride into the past and dropped his cell phone on a Civil War battlefield. (Who wouldn't want to see Pickett's Charge, after all?) With his own eTab too low on juice to take him all the way back to his own time, Grown-Up Julian needs Young Julian to locate a quantity of Cucumium so he can go back to the Civil War and retrieve his cell phone, then get home before his parents find out. The two Julians break rules, break curfews, and break into the Intermediate School in an effort to locate some Cucumium (though they're not exactly sure what it is), so they won't be forced to share the room and fight over the top bunk forever. Oh, and if Grown-Up Julian stays, it could, as a side effect, pollute the natural timeline and rewrite history as they know it. No pressure.

Science and fun hit quirky humor as a boy, Julian, taps into time travel with unexpected twists and adventure.

Julian is twelve-years old and pretty normal for a kid. That is, if his dad wasn't a genius but mad inventor and his family wasn't constantly moving around. Julian always changes schools and has not only trouble with bullies but also finding friends. Still, none of this is a real problem. When his father invents the eTab, it has an unexpected side-effect. Soon, Julian finds himself leaping back and forth through time. When his older self appears and insists that Julian has effected the timeline and must bring everything back into sync, Julian's life really turns into an adventure.

The book is told in narrative form by Julian. The first couple of chapters give the reader time to sink into his life and world, one which sets the perfect tone. His mother is grounded and keeps life organized, while his father swings in a complete opposite direction as a crazy scientist. The fantasy aspect is clear from the get-go and allows the science to sweep into more fantastical directions. It's action and adventure with a huge does of humor and fun.

There's never a boring moment as Julian finds himself traveling through time. This takes a few new twists on the time travel direction, which give it a refreshing spin. Fun and humor hold firm, making it an enjoyable read, and yet, there are a few messages swung in, which make the reader think.
It's a fun read for humor and adventure fans.