The first book in a brutally stunning series where a young girl finds herself becoming more monster than human and must uncover dangerous truths about who she is and the place that has become her home.
As the last child in a family of daughters, seventeen-year-old Janneke was raised to be the male heir. While her sisters were becoming wives and mothers, she was taught to hunt, track, and fight. On the day her village was burned to the ground, Janneke—as the only survivor—was taken captive by the malicious Lydian and eventually sent to work for his nephew Soren.
Janneke’s survival in the court of merciless monsters has come at the cost of her connection to the human world. And when the Goblin King’s death ignites an ancient hunt for the next king, Soren senses an opportunity for her to finally fully accept the ways of the brutal Permafrost. But every action he takes to bring her deeper into his world only shows him that a little humanity isn’t bad—especially when it comes to those you care about.
Through every battle they survive, Janneke’s loyalty to Soren deepens. After dangerous truths are revealed, Janneke must choose between holding on or letting go of her last connections to a world she no longer belongs to. She must make the right choice to save the only thing keeping both worlds from crumbling.

Grit, survival, pain, and emotions pack these pages as a young woman tries to find balance in a world of monsters.

At age seventeen, Janneke's family was murdered, while she was kidnapped by the goblins and taken to their realm. Trained by her father to be a fighter, she survived torture by her first master and has managed to continue to live one hundred years under his nephew, Soren. When Soren is called to pay the usual respects to the Goblin King, the king dies and the hunt for an heir begins—the first to kill the White Stag. Soren takes Janneke along with him on the hunt, insisting that their relationship is changing and that after so many years in the Permafrost, she now is turning into a goblin herself. Although Soren considers himself at least her friend, Janneke refuses to forget the hate she has for the goblins—vicious, emotionless creatures who slaughtered her entire family. And she certainly refuses to become one of them. But as the hunt begins, she must fight for more than her life. She fights for her very soul.

This was a gripping and amazing read. The material is not timid, but rather bites, grinds and hits even the darkest of places. While this is sold for the young adult audience, I found it better suited for New Adult or Adults. While Janneke might have the body of seventeen, she has lived over one hundred years in some of the most horrendous circumstances. These years molded her and gave her the experience, fight and mind of someone much older than seventeen. While older young adults will be fine with the story, the material does hit tougher themes and might not be fitting for all teens.

That said, this read grabbed me from the first page and didn't let go until the very end. Janneke is a tough girl with tons of emotional scars. She has inner battles and very high-stake outer ones. Death lurks around every corner, and the goblin world is not for the meek. Her hate for the goblins is understandable, and this makes her easy to cheer for until the last page. Add the white-haired Soren, who is powerful, hot and holds more heart than Janneke wants to believe, and it's a wonderfully delicious mix for fans of action packed fantasy with dark undertones and romance thrown in.

The world which makes up the Permafrost is wondrous in its creatures and sights. There's cruel beauty and action packed moments to make the heart skip a beat. The author keeps the tension high in a delightful dance of survival, emotions and fears. With a little more background information surrounding the world, it would have been unforgettable.

While I loved this read...and will give it full marks because it is extremely well written in many respects...I had a little problem sinking into the Permafrost and Janneke. The story starts right in the middle of action. Janneke has already resided in the Permafrost for 100 years and has had 99 years to come to terms with the horrible things her first master did to her.  These experiences make her what she is. While flashbacks attempt to fill in the holes (especially of Janneke's human past), the moments come too late making the extreme empathy, which would have molded her into a beyond-awesome character, weaker than it might have been. Still, this story had me pinned to the pages, and I didn't want to put it down even for a moment, which makes it a definite 5-star read.

Fans of goblins, tense fight scenes, strong heroines, dark plots and difficult romance will enjoy this book. Now, that this has laid an amazing beginning, it will be interesting to see where the series goes next. 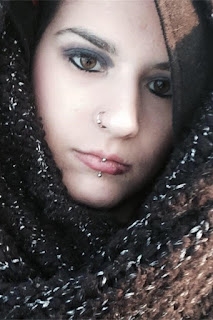 Kara Barbieri is a writer living in the tiny town of Hayward, Wisconsin. An avid fantasy fan, she began writing White Stag at eighteen and posting it to Wattpad soon after under the name of ‘Pandean’. When she’s not writing, you can find her marathoning Buffy the Vampire Slayer, reviving gothic fashion, and jamming to synthpop.