Review: When Our Worlds Meet Again by Aniesha Brahma 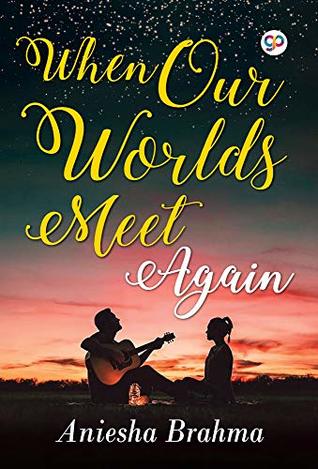 
Two years after the events of 'When Our Worlds Collide', Zayn and Akriti are now leading extremely different lives. Akriti has come back from her stint at the business school and running her mother's café. Zayn has run into trouble in his PhD program and has come home for a break. While he thinks that things are just as he’d left them two years ago, that is far from the truth. In a last ditch attempt to make Akriti remember the connection they had once shared, Zayn tries to recreate all their memories. But things are never the same when collided worlds meet again...

With lots of heart, tough questions surrounding life, family and romance slam against the questions of goals and the paths a person desires to take.

Now back from business school, Akriti has taken over her mother's cafe and plays mom to her younger step-siblings, since her real father and her step-mother can't seem to keep their own lives in order. She's under quite a bit of stress as she tries to juggle the constant responsibilities. And then, Zayn shows up again, taking a break from his PhD since things aren't going as smoothly as he'd like. This is the last distraction Akriti needs, especially when Zayn's ex still has her claws out. Akriti needs to figure out what she wants and what she needs to do to get to a point where her life is back where it needs to be.

This is the second book in the series and should be read in the order of the series, since the story builds on the happenings of the last book.

While this could be considered a romance, it's so much more. Akriti is still in love with Zayn but knows that, at this time, it's a romance with no future. Her inner struggle comes across as a realistic and understandable tug-a-war, and it's clear that she's got enough on her plate in other aspects of life. The romance is well done, especially when taking this into consideration. There are heated moments, but they aren't without a bitter after taste. And yet, the required desire and hope also builds to keep the reader guessing whether or not it will work out in the end. It's well woven with just the right amount of zest and sour.

As said, this is more than romance. So much more. The author touches upon some tough subjects of family, alcoholism and knowing when to draw a wall. Akriti's struggles hit home, and it's hard not to feel for her as she attempts to come to grips with everything. The friends around her offer the right support and humorous reliefs to keep the tale from growing overly serious, yet holding the message and tension in grip.

This is an easy read. Dialogue controls the pacing and plot, leaving descriptions to a minimum. While I missed a little more depth on the scene end of things, the writing style keeps a steady pace which makes it hard to put the book down. The relationships between the characters and emotions remain as the constant focus, which works nicely for the theme.

Readers who love heart, difficult romances and a fighting spirit will surely enjoy diving into these pages.

Email ThisBlogThis!Share to TwitterShare to FacebookShare to Pinterest
Labels: Aniesha Brahma, When Our Worlds Meet Again