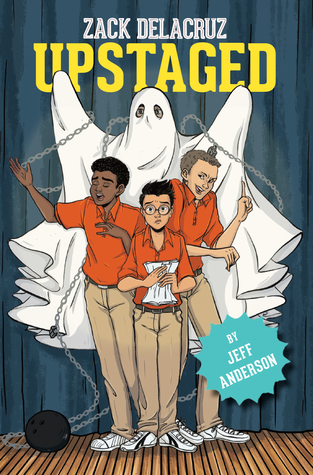 
Bah humbug!  Zack Delacruz wants to win the role of Scrooge in Davy Crockett Middle School’s production of A Christmas Carol—and Abhi’s admiration, too. But he’s not the only one trying out for the play. So are José (El Pollo Loco), Marquis, and Janie, who dreams of being all three ghosts. What role will Zack end up playing on stage . . . and in his life? Bowling balls, gurgling stomachs, complete chaos, and quick detective work turn this year’s drama into a spectacular scene that will have actors rising to new heights—literally—and leave readers rolling in the aisles.

Life gets turned in ways Zach never expected, when the school puts on a play, and thanks to a girl, he suddenly finds himself doing something he never wanted to—auditioning for the main part in the play.

When the school librarian announces the new play, The Christmas Carol, Zach's friends suddenly want to take part. Zach wants nothing to do with it, but then the girl that he might like bats her eyes at him, and the next moment, he's secretly planning on auditioning. Even before the auditions, the excitement and funny personality traits of Zach's friends ensure many hilarious moments. Then, the cast is chosen and chaos really begins.

This is the third book in the series. I have not read the other two, but still had no problem diving into this book. In other words, it can be read as a stand alone.

This book is fun, and it's the characters which make it shine. Each one of Zach's friends has a very distinct personality, and each carries a quirky trait. The author does not go at this subtly, but allows these oddities to come out full force. It's silly, it's giggle-worthy, and still, it comes across realistic. While humor abounds and the situations threaten to run out of control, these are moments middle graders can sympathize with and see themselves reflected in. The self-insecurities, friendship issues, first girl problems and teacher predicaments hit home despite the sillier scenes.

While the play, The Christmas Carol, suggests this might make a great holiday read, the story itself does not rotate around holiday themes and easily slides in to any time of year. The school setting is well done, never overly described but captures the atmosphere nicely. The dialogue flows well, and although some remarks seem odd for the age group, it fits the personalities well. The entire thing is a humorous school drama which kids will smile and laugh through the entire way.

Jeff Anderson is the author of Zack Delacruz: Me and My Big Mouth (2015), and Zack Delacruz: Just My Luck (2016)—a series that has sold over 30,000 copies! He's also the author of Mechanically Inclined, Everyday Editing, 10 Things Every Writer Need to Know, and Patterns of Power. A former elementary and middle school teacher, Jeff travels to schools across the country working with teachers and students to discover joy and power in the writing process. Visit him at writeguy.net or follow him on Twitter at @writeguyjeff. Jeff Anderson lives in San Antonio, TX and is available for interview.
on January 06, 2019