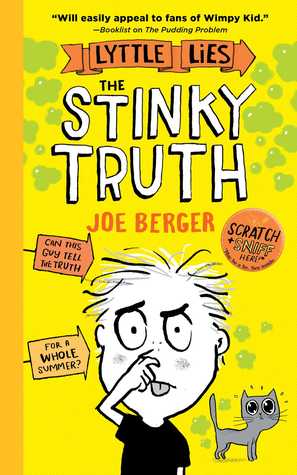 
Sam Lyttle learns that sometimes the truth can hurt just as much as a lie in this follow-up to the humorous and cheeky illustrated middle grade novel The Pudding Problem which Kirkus Reviews calls perfect for “fans of Timmy Failure and Big Nate.”
School’s out, and a long, hot summer of endless fun beckons for Sam and Charlie. Except that no sooner has it begun than they’re wishing it away in anticipation of Cry Wolfe, the first Wolfe Stone movie, which opens at the end of the season. Sam’s mom issues him a challenge: if, and only if, Sam can make it through the entire vacation without telling a single fib, he will be allowed to see his crime-fighting hero on the big screen.
Six whole weeks, without a single lie?! No problem. Until the small matter of a tray of snowball cakes in the fridge with a Sam-sized footprint in them threatens to end Sam’s dreams of cinema heaven. Can he continue to steer clear of lying, while not having to reveal the actual reason he was in the fridge, in the dark, standing on a table to get to the top shelf to hide ‘the thing that shall never be named?’

Loaded with silly illustrations, difficult moments, and hilarious outcomes, this is a book which fans of series like Wimpy Kid are sure to enjoy.

Sam does have a tendency to shoot out lies. Constantly. This has never been a problem for him, but when his mother has had enough, she unfortunately has the greatest tool in the world to make him think twice about his far fetched tales—the showing of the best movie showing ever, Cry Wolfe. He and his best friend have been waiting to see it for months, and now, it's only three weeks away. But if he wants to see it, he'll have to keep those lies at bay. All of them. Not only is this a challenge for him, but the truth has other unexpected results.

Humor reigns as Sam attempts what he assumed was impossible—to always tell the truth. It's not that he loves to lie...which makes him sympathetic...rather, situations push him to panic and out comes a tale which saves him. A tale which is never true, and the ones he recites are funny. It was a predicament easy to relate to because most kids would rather squiggle out of trouble if they could.

While every page packs quirky, goofy and simply funny moments, there is a lovely message built in too. Lying is more a part of daily life than anyone wants to admit, and the truth can be much more powerful and saving than any lie ever could be. This message is loud and clear as Sam squirms through the most wonderful predicaments...and each one is not out of the realm of reality. Every situation is one (more or less) that can take place or even does. The story hits home and guarantees giggles galore. Not only for kids.

Joe Berger is the author and illustrator of the Bridget Fidget books, has illustrated seven other picture books including the new Chitty Chitty Bang Bang novels by Frank Cottrell Boyce, and has a long-running cartoon series in The Guardian, as well as TV animation projects visit Joe online at JoeBerger.co.uk.
on January 02, 2019