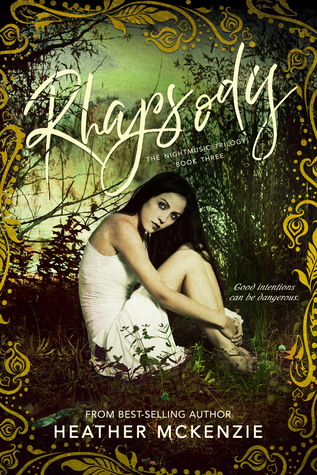 I am a survivor. A warrior facing battle.
I will protect those I love with my life...
and take back what's mine.

Kaya has minutes to save the man she loves. Minutes.

Luke's life is hanging by a thread, and Kaya has to do the unthinkable―go back to her father. It's a worthy way to die, giving your life for the one you love. But not everyone feels that way―Thomas in particular. He'll do whatever it takes to keep her with him, even if it means stealing her precious minutes.

But there's more at stake than just her life.

The truth behind Henry's genetic research is shocking, and Kaya must stop him before he can release a weapon of mass destruction upon the world. But how do you stop a man with unlimited resources? Caught between dying to save the one she loves―or living to save millions―Kaya's heartbeat is her only bargaining power.

A spine-tingling thrill ride of unearthed secrets and true-love's capacity, Rhapsody is the final installment of the compelling Nightmusic Trilogy.

This is the third and last book in the Nightmusic Trilogy. The books build on each other, meaning this does not suit itself for a stand-alone but should be read as an entire series.

Kaya escaped her father's hands and has a chance to start a new life, but she can't. The love of her life and several other friends are being held captive in her father's prison. Even her imagination can't hold with the extent of torture they are enduring. Together, with her friends and a man she might also love, she's determined to find a way to save them all. But her father isn't only rich and clever, he's as evil as they get. It will take a miracle to save the others and not fall back into her father's clutches in the process.

Kaya has developed as a character, and we meet her as a strong woman who is not easily fooled or pushed around. However, she's not a full-hearted fighter either and still has a huge heart and a mild temper. She's not always sure of herself but has learned to swallow that down, trust her friends and keep a level head. In this book, she comes across a little naive but only on the surface. She's a force to be reckoned with. It makes for a great character and sets the stage for the amazing plot she faces.

A lot comes together in these pages. The author does a great job at bringing the various characters and their secret as well as not so secret intentions full-circle. Some endings are shocking, while others are definitely satisfying. But the last game with Kaya's father is by no means timid and creates an exciting and tense final battle of more wits than anything else. While there are some brutal moments, especially in the beginning prison scenes, it keeps rank with the rest of the series.

Romance is a major part of this book as well. Kaya now faces the decision of who she wants to give her heart too. The love triangle holds enough tension to keep it interesting, and there are many other emotions involved. As every other part of Kaya's life, it's not an easy path. The solution to this love triangle wasn't quite my thing, but most readers will probably find it satisfying and have their favorite to root for.

The end of this novel wraps up the problems with Kaya's father nicely, and includes some closure in the direction of her grandfather as well. While the ending did feel a bit hasted because some of it could have built its own novel, but the author reeled it in. In any case, the ending works and closes the trilogy nicely while leaving enough food for thought to keep the characters alive in the mind for several days after the book has been laid down. Fans of YA Thrillers and Romance are going to enjoy this series.