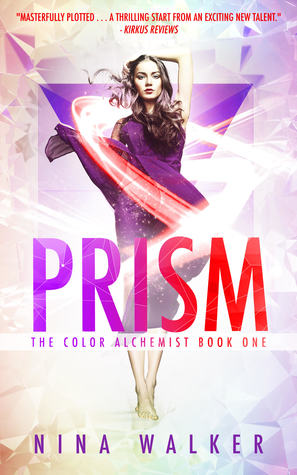 
What if color held the secrets to powerful magic?
Forced to move into the palace, Jessa begins training as a Color Alchemist under the direction of the kingdom's most eligible bachelor, Prince Lucas. As an alchemist, Jessa must capture and harness the color of living things. Every color has a unique purpose, except red. Red is the untapped magic no one can access—until Jessa.
Prince Lucas is running out of time. His mother is deathly ill and healing magic hasn’t worked. When Lucas suspects someone is using alchemy to control her, he sets out to discover the truth, no matter the cost.
PRISM is the first installment of a unique young adult romantic fantasy series where a dystopian world with a Victorian flair meets the dynamic magic of color!

With a new twist into the world of alchemy and a slide into a dystopian setting, this is a of intrigue, tension, and royal romance.

Jessa's dreams are about to come true. That night she will perform a solo on the stage, and the royal family will even be there to witness it. She's on the best way to becoming a professional ballerina. But that afternoon, royal guards appear at her door, accusing her little sister of performing color alchemy—the failure to report an alchemist is punishable by death. Jessa needs to protect her sister no matter what, but the lie is soon revealed when Jessa herself unknowingly unleashes color alchemy during her performance—an ability she had no idea she possessed. Being too old for training, her death is eminent. But the king noticed the one thing that will keep her alive, she can access red alchemy, a rare ability no one else has every done. He will do anything to have control of this color—anything to have control over her.

This was a fascinating take on alchemy and colors, and I enjoyed watching it shift into a dystopian world. The author centers the logic around the seven chakras, which works well enough to keep the story interesting and entertaining. While the evil government, as very often seen in dystopians, is the terrifying force, and there's the opposing resistance, the balance between the two remains foggy enough to keep things unclear questinable even by the end of this book. In other words, there's much more to come in the rest of the series.

The characters are easy to cheer for or hate (depending on which one), and there are gray ones in between, whose intentions are impossible to guess. Even here, it appears that the series will twist and turn in all sorts of directions as it continues. Jessa is determined, loves her family, ready to take risks, but sometimes, a little slow on catching things or too quick in decisions. Her desires are pure, however, making her a true heroine to follow. Lucas also is a prince with doubt and secrets, but one with a heart probably even purer than that of Jessa. The flip-flop in the point of view between the two allows both to come through clearly and sympathize with. There is a bit of instant-romance, but there are enough secrets and struggles on this front to keep it from growing too cliche or simple.

There was never a boring moment, making it difficult to put the book down. I easily read it in one sitting and enjoyed every moment. Although not action packed, the tension remains high the entire way through, and there's a wonderful weave of secrets and emotions. There are a few moments which hit with a stumble, and the ending comes across rushed. The last big discovery hit too sudden, without enough build-up on the 'evil' guy's side, and resulted in a too nicely-packed conclusion. Still, it wasn't enough to frustrate me to the point of not wanting to continue the series. I am looking forward to hitting book two and am curious to see where all of this goes next.