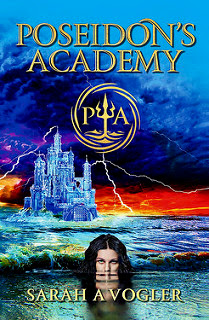 
Getting sucked into a whirlpool, sleeping in monster-infested woods, and battling psycho sea-nymphs was not how Hailey planned to spend her first year of high school. But when you’re the only Zeus in the world, life tends to get a bit complicated.

The Great Battle saw the world changed forever when humans killed the gods and absorbed their powers. One power was coveted above all others: Zeus’s. Thirteen-year-old Hailey Woods is the first Zeus in over a century. Unlike everyone else, she hates her powers because of an ancient prophecy that claims a Zeus will have to save the world someday.

Hailey doesn’t want to save the world. She wants to be a normal teenager, whose biggest dilemma in life is deciding what to eat for lunch, rather than training to become the ultimate weapon. Poseidon’s Academy, an underwater palace where her powers don’t work, was meant to give her that opportunity. But when she arrives, she discovers the sea-nymphs living there are plotting to resurrect the gods, and Hailey must find a way to stop them before they can enact the prophecy.

So much for normal!

You can find Poseidon's Academy on Goodreads

Greek mythology takes an interesting twist into an entirely new world, while keeping excitement and the difficult life of being a teenager in high gear.

Hundreds of years before, the Greek gods were defeated during the Great Battle, and their powers showered on humans below. Since then, everyone has a power related to one of the earlier gods. Hailey is a Zeus and the only one on the entire planet. That also makes her the someday savior for the entire world according to a prophecy. But Hailey hates being stared at and pointed out. So, she enrolls into the Poseidon Academy. Since she requires the sky for her powers, no one will know her there. But excitement soon changes to tension and adventure as more awaits her there than she could have ever expected.

This was a refreshing twist on fantasy and Greek mythology. The characters and scenes hit the teenage group extremely well and bring across the fears, thoughts and expectations in a way readers can easily connect to. Hailey's desire to get away from the stress is completely understandable, and her friends and relationships with others at the academy are easy to relate to. She makes mistakes and isn't always spot on with her thoughts and decisions, and that's exactly the way it should be.

I enjoyed the world descriptions, and the author brought the beauty and fascination of the undersea world to life in a bright way which lets the imagination soar. Everything, especially at the beginning, is bold and sparkly hitting the atmosphere well. As the story goes on, the action and adventure takes over and pulls the reader in. It is a fun read and offers excitement until the last page.

My problem with this book, however, is the world building. While it's a lovely adventure with great characters, the background doesn't hold well. It's not clear what happened with the gods or how the entire powers thing works in daily life. Especially when it comes to Hailey, there was a huge vacuum. She's supposedly the only one with Zeus powers and the center of a very important prophecy, a fact which appears to be well known. If this was so, she wouldn't have the freedoms or the possibility to 'hide' under the water. Plus, it's never clear why she's the last one or how powers are passed down or anything in this direction. Unfortunately, this lack of information fogs a little into everything.

Still, anyone who simply wants an entertaining read with fun characters and a great adventure will enjoy Hailey and her friends, and wish they could attend Poseidon's Academy themselves.