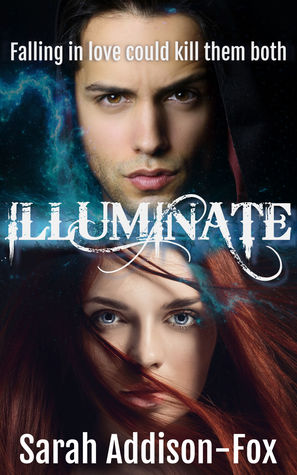 
He's trained to manipulate her.She's trained to illuminate him.Falling in love could kill them both.Shunned Luminary Merrin, is an outcast Tracker guarding one of the borders closest to Tartarean's stronghold.Called a reckless rogue by the other Luminaries, she's haunted by her past failures and there is no way she will let another reclaimed Luminary slide back to the dark.Tarquin is a Hunter who survives with no memory of who he was before Lucius Tartarean coerced him into service.Forced to kill on demand and to utilise his manipulation skills, he's nothing more than a slave to the dark that controls his every move.When Merrin is called to Track a fallen Luminary, she isn't prepared for a half-light who shouldn't exist.

Between the tension of the hunt and the slow-burn romance, this is a story with fresh twists and an intriguing plot.

Tarquin is a Hunter, who follows his orders without question. While pursuing his next target, he finds himself hesitating. Merrin, his target, is hunting him as well, but for an entirely different purpose. When Tarquin agrees to listen to her before killing her, his own world turns topsy-turvy as he discovers everything he's believed has been a lie. Merrin's job is to draw him into the light so he can discover his true self as a Illuminate. Unfortunately, he's not what he appears and darkness isn't just something he's been trapped by, it is a part of who he is.

The story grabs right away as the hunt is underway, but it's clear that it won't be a normal one. This tension remains through the entire book, but the author does a great job at adding unexpected turns along the way. It's hard to guess what's true, and where the light and dark really play their role as the symbolism behind these attributes mutates right along with the intrigue. The beginning took a bit to sink into as the background and world unfolds slowly, but once this gets flowing, it's hard to put the book down.

Merrin is a little hard to grasp. She carries her own baggage, which muddles her decisions...especially since she tends to be a bit spontaneous anyway. While I cheered for until the very end, there were moments where her decisions stumbled. She does play a wonderful counter-part to Tarquin, who is fighting his own inner battles. Throw in Merrin's mentor, and it's a sparking mix.

While there is much intrigue, high tension and unexpected twists, the romance plays a solid role throughout the tale. It's a hard one with lots of give, take, and learning to trust. But this is definitely a read for romance fantasy friends who love the action and adventure along the side. And what an exciting mix it makes.