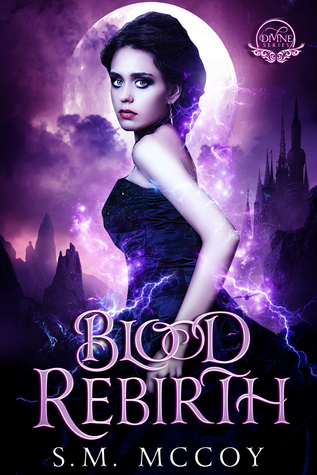 A Blood War prophesy. A darkness growing inside her. Can she find the seven powers before the trial grounds are lost forever?

The Oracle’s powers need a new vessel and everyone wants the talisman that will give it to them instead of the prophesied successor. In a race against time, Crystal must train herself to survive the trial grounds deep within the Underrealm and find the seven powers to obtain the talisman before anyone else; or it won’t be just her soul at risk, but the whole supernatural realm as she knew it.

The war between good and evil rests in the hands of a novice all while she battles her inner demons confused between following her heart or her mind, saving herself or everyone else.

A rich world accompanies fast-paced adventures as this story twists and turns in all sorts of wonderful ways.

Note: This is the second book in the series and cannot be read as a stand-alone, since everything builds and continues from book one.

After a dangerous decision, Crystal now finds herself at a school where those who are not human or demon, train their powers. But she's not sure what she is. She's not even sure she'll be alive much longer as the human part of her is dying and the snake venom is battling whatever divine blood she might have. Her new 'classmates' aren't only much more powerful and advanced than her, but many aren't ready to accept her in their midst. She's not sure who to trust as one of her few possible friends reveals the future which awaits Crystal, one that means her sacrifice. Yet, the Moon Goddess insists Crystal must find a way to survive. Too bad, Crystal is up against blood-thirsty, soul sucking demons and other creatures—all desiring to kill or possess her. She needs to figure out what she is, become capable and somehow, deal with a man who's convinced they are past and forever soul mates. Crystal is in way over her head.

I enjoyed this book much more than the first one in the series. While there was still holes and confusion, especially in the first chapters, concerning the magic and characters Crystal met, the story settled into an engaging read I couldn't put down. This is a complex world, one where its uncertain who is good and who is evil. And most characters probably fall somewhere in between. The range of creatures, magic and scenes explodes with colorful fantasy and promises all sorts of surprises. As a fantasy fan, it was a treat to experience the variety and vivid characters and descriptions. Yet, the author manages to keep it anchored down so that Crystal comes across fairly normal for an older teenager.

While there are fight scenes, some gore and evil twists which chill, Crystal herself is not the powerful, defeat-all fighter. She's unsure of her powers...as is everyone else...and has much to learn even at the end (which promises much to come in the next book). There are quite a few characters, each with a distinct personality and purpose. Most are a treat to follow and very intriguing (I have a few favorites), where a couple needed a little more purpose and depth. But I'm assuming this will be covered in the next book as well.

This was a quick paced read without a boring moment. The romance is different than the usual YA reads, and carries a little spark but is uncertain and unsure, making it slide nicely with the rest of the plot. In other words, it's as questionable (as is the hero) as everything else. I'm definitely looking forward to the next book to see where all of it will go because Crystal does have herself in quite the mess.