Review: Bounce Back by Hena Khan 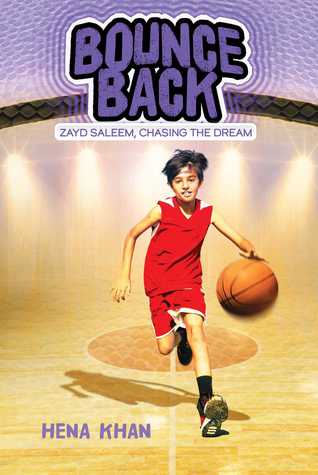 From the critically acclaimed author of Amina’s Voice comes the third book in an exciting middle grade series about a scrawny fourth-grader with big dreams of basketball stardom.Zayd has a plan. He’s ready to take the reins as team captain of the Gold Team.But when an injury leaves him on the sidelines, his plans get derailed. Can Zayd learn what it means to be a leader if he’s not the one calling the shots?


This is the third book in the series and while it is more fun to follow Zayd from the very beginning, these can be read as stand-alones.

Zayd's basketball life is looking up. He has a brand new, straight hoop at home to practice with, and he has a real shot at becoming team captain. But when a misstep during practice ends with a sprained ankle four weeks of sitting out might be more than he can handle. To add to his troubles, his grandfather suffers a heart-attack and his entire family is on edge.

I'm liking this series more and more as it progresses. Zayd is a normal kid who loves basketball. It's his dream to become a star player, and he's doing everything he can to achieve it even though it's not an easy path. His disappointment at the injury is understandable and his frustration believable. The only thing which bugged me here was that he didn't attend practices during this period but sat on the couch. For those kids who were that interested in their team and the sport, this is unusual as they would still be on the sidelines following everything as much as possible. (The coach would even insist on it). But this is only a small issues which doesn't hurt the story.

The author does a great job of balancing Zayd's interest and troubles with basketball with real life. His family is close knit and adds a wonderful note to the court troubles. Zayd's care and concern for his grandparents and his way of handling it are heart-warming and very natural. It's a mix which makes him easy to identify with and a story which draws in book after book. The addition of his family's cultural difference also adds a nice dash of spice. The author builds these small details in so smoothly and naturally. I'm excited to see what happens to Zayd next.

And here she is...
Hena Khan is author of several books including Amina's Voice; Power Forward: On Point; Bounce Back; It's Ramadan, Curious George; Golden Domes and Silver Lanterns; and The Night of the Moon. Hena lives in her hometown of Rockville, Maryland, with her husband and two sons. You can learn more about Hena by visiting her website at HenaKhan.com.