Review: The Book of Esther by Emily Barton 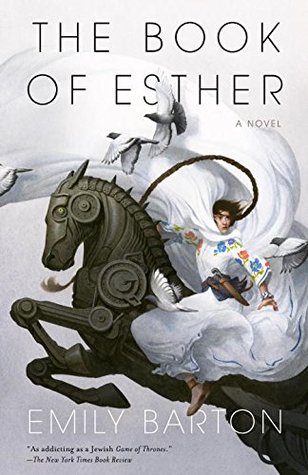 
Eastern Europe, August 1942. The Khazar kaganate, an isolated nation of Turkic warrior Jews, lies between the Pontus Euxinus (the Black Sea) and the Khazar Sea (the Caspian). It also happens to lie between a belligerent nation to the west that the Khazars call Germania—and a city the rest of the world calls Stalingrad.
After years of Jewish refugees streaming across the border from Europa, fleeing the war, Germania launches its siege of Khazaria. Only Esther, the daughter of the nation’s chief policy adviser, sees the ominous implications of Germania’s disregard for Jewish lives. Only she realizes that this isn’t just another war but an existential threat. After witnessing the enemy warplanes’ first foray into sovereign Khazar territory, Esther knows she must fight for her country. But as the elder daughter in a traditional home, her urgent question is how.
Before daybreak one fateful morning, she embarks on a perilous journey across the open steppe. She seeks a fabled village of Kabbalists who may hold the key to her destiny: their rumored ability to change her into a man so that she may convince her entire nation to join in the fight for its very existence against an enemy like none Khazaria has ever faced before.
The Book of Esther is a profound saga of war, technology, mysticism, power, and faith.

This is a well-woven, tightly packed tale which hits on heavy themes such as faith, power, the value of diverse individuals and justice.

Esther is the daughter of the nation's adviser, well-educated and more than aware of what is expected of her in her position. She's only sixteen but is already promised to be wed to another powerful family—a marriage she's excited about. Her country stands on the brink of war with a very technically advanced Germania, one she's learned does not treat Jews or captives well. She sees the mistakes her country's about to make, and she's sure she can help in the upcoming battle. But she's a woman and, as such, must remain in her place. In hopes of saving her country, her beliefs, and those dear to her, she ventures to a far away land where she hopes to become a man and do what she as a woman is incapable of.

I was looking forward to reading this. Esther is an interesting historical figure, who's bravery and faith is often overlooked. Mix that with elements of steampunk, intrigue and threat of war, and this promises to be an engaging ride.

The writing in this is very solid. The author does a fantastic job at bringing an alternate dimension to life, while maintaining clarity in the very complex layers of characters, historical elements and intrigue. Esther comes across as a compassionate but brave young woman, who's determination to keep her country safe is simply an inspiration. She's tough, yet warm-hearted and even soft at moments. Her curiosity and cleverness make her a character to cheer for to the very end. This, added with the entire question of women's place in a male driven world, give tons of depth to this novel. But sometimes, less is more.

While the author manages to masterfully maintain order in what could easily roll over into chaos, this book was still too packed for my taste. The historical elements wrap around each other, taking events and historical figures from multiple eras and fusing them together into one war. Each historical event was tremendous on its own, and this mixture threatened, at least for me, an overload. Add the mixture of steampunk technology and a dose of the feel of Game of Thrones, and it grows too rich. The last pinch of gender identity toppled it over the edge and made this a read I simply couldn't connect with. That the author is able to hold all of this together without a shake of doubt, speaks volumes about their talent.

Although this is a very well-crafted tale with tons of elements to promise an exciting read, it simply wasn't a book for me.

Email ThisBlogThis!Share to TwitterShare to FacebookShare to Pinterest
Labels: Coming of Age, Emily Barton, Fantasy, Steampunk, The Book of Esther