February's slowly drawing to an end (where did it go?), and that also means Black History Month is coming to a close. But I didn't want to leave off without presenting one more gem, which not only dives into history but holds an interesting, little known event as well. Not only kids will enjoy this one, but I think adults will also find this one inspiring. 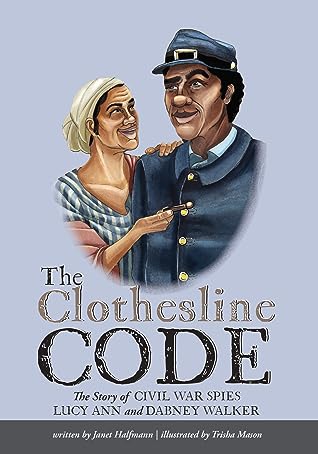 Lucy Ann and Dabney Walker didn't have to risk their lives to spy for the Union army. The couple had already risked everything to escape slavery themselves. But in early 1863, in the midst of the Civil War, the couple was determined to help defeat slavery for everyone—no matter the risk. Together, they created a secret code disguised as laundry on a clothesline. Their plan was incredibly dangerous: it required Lucy Ann to sneak into Confederate territory to steal military secrets, while Dabney took the vital information she gathered to the Union army. This true story of sacrifice and bravery shows us that when we have courage and compassion for the world around us, even the simplest items can become powerful tools for change.

I'm always excited to find books, which deliver little-known yet very interesting facts from history...and that in a way younger readers can understand.
Dabney joined the Union forces and learned how they used a flag to communicate over distances. Wanting to help, he and his wife developed a plan to gain even more information on the Confederate army's movements. After developing their own secret code according to how his wife, Ann, hung laundry, she snuck across the river, and found a way to be employed as a wash-women. There, she signaled the movements of the Confederate soldiers at a huge risk to herself.

Not only does this book present a historic occurrence in a way young readers will understand but does so in an interesting way. The text is a little long for younger listeners, but those ages 6 and up will enjoy the tale, either as a read-aloud or on their own (when they are more sure of their words). The author keeps the tale flowing, allowing the facts to slide in without ever letting the tale slow down. But then, this is an interesting tale, anyway. Plus, it's easy to understand the threat and cheer for the couple even when the tension mounts.

One of my favorite things about this book are the illustrations. These are very well done and do a great job at bringing the time period across. The illustrations go hand-in-hand with the text and bring the tale to life. At the end, there is more information for anyone wanting to dive a little deeper into the historical moment. 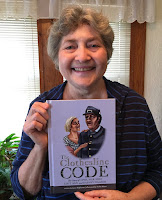 Janet Halfmann is an award-winning children's author who strives to make her books come alive for young readers and listeners. Many of her picture books are about animals and nature. She also writes picture book biographies about little-known people of achievement. Recent titles by Janet include The Clothesline Code: The Story of Civil War Spies Lucy Ann and Dabney Walker; A Bobby-Dazzler of a Pouch!; The Story of Civil War Hero Robert Smalls (Chapter Book for Grades 3-7); Midnight Teacher: Lilly Ann Granderson and Her Secret School; Grandma Is a Slowpoke; Animal Teachers; Eggs 1, 2, 3: Who Will the Babies Be?; Home in the Cave; Star of the Sea; Good Night, Little Sea Otter; Fur and Feathers; Little Skink's Tail; and Seven Miles to Freedom: The Robert Smalls Story. Janet has written more than forty fiction and nonfiction books for children.Before becoming a children's author, Janet was a daily newspaper reporter, children's magazine editor, and a creator of coloring and activity books for Golden Books. She is the mother of four and the grandmother of six. When Janet isn't writing, she enjoys gardening, exploring nature, visiting living history museums, and spending time with her family. She grew up on a farm in  Michigan and now lives in South Milwaukee, WI.

You can find more info about the book on my website: https://www.janethalfmannauthor.com/the-clothesline-code.