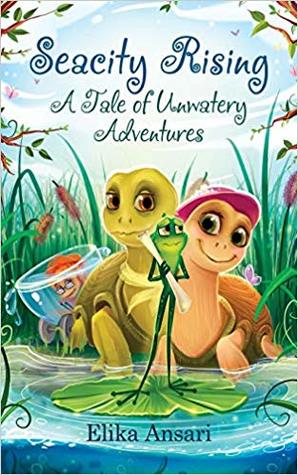 
When the underwater animals of Seacity pond learn that their home is in danger, they decide to investigate further by doing something no one has ever done before - go up to land to seek the answers they need. An unlikely team of two royal turtles, a genius goldfish and a timorous frog are then assembled to embark on a series of adventures. Whether they are racing the fastest tortoise on earth, falling in love with travelling mice theatre, or bringing peace to warring ant colonies, each unique experience is taking the group of friends closer to the heart of what is really going on. But will they make it back in time to save Seacity before the Winter’s Slumber?


Water animals head to an exciting adventure on land in order to save their world in this book packed full of thought and heart.

Babak is a satisfied frog, who does his own thing and loves to seek out small adventures. When one leads him to a mysterious message written in a special language, he heads to the King. Soon, he finds himself part of a group of three, who need to leave the only home they know, head out onto dry land, and do their best to try to find away to thwart the danger that could destroy the place they love.

Although not completely fitting, this actually hit me somewhat as a mix between Watership Down and Frog and Toad are Friends...but yet, nothing like these at all. In the first chapters, we meet Babak and the creatures of the pond. He's a kind frog with a lot of heart. Sometimes he comes across as mature beyond his years, and sometimes, very young. But if there was ever a frog for adventure, it's this one. He's looked down upon by the other creatures (although I was never sure why), and has quite the adventure before him as he's thrown into a group with two other, very obviously capable companions.

These first chapters drag a bit and I found myself drifting away more than once, but once the tale does get going, it is packed with adventure. There are several themes including self-confidence, working with others, and friendship, but the main one centers around environmental issues. It was interesting to take the side of the animals and see how they might view such changes. It does have food for thought for young readers and opens up to discussions.

The illustrations are a bonus and make it fun to flip through the pages just to find them. They add a nice, whimsical touch and bring the characters to life. This also adds a nice pause, since the writing itself leans toward the upper end of the middle grade with slightly tougher vocabulary and a more mature wording. While older, sure middle graders readers won't have a problem with it, the plot and theme slides more toward the younger end. So, I'm not sure what ages to recommend this one to.

Animal friends who love adventure will want to pick up this one. And I especially could recommend this one to homeschoolers or those who would like to explore environmental issues with middle grade readers, since it does do a nice job at bringing some tougher topics down to a level younger readers can understand.