Review: Daring Darleen Queen of the Screen by Anne Nesbet 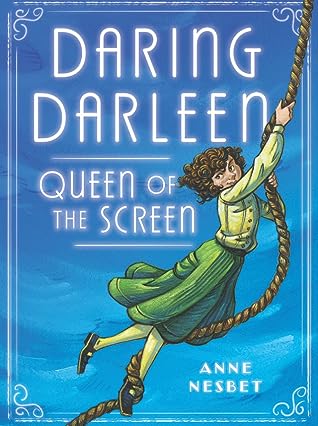 When a publicity stunt goes terribly wrong, twelve-year-old Darleen Darling, star of the silent film era, must defeat villains both on screen and off in this edge-of-your-seat adventure.

Lights! Camera! Kidnapping?
It's 1914, and Darleen Darling's film adventures collide with reality when a fake kidnapping set up by her studio becomes all too real. Suddenly Darleen finds herself in the hands of dastardly criminals who have just nabbed Miss Victorine Berryman, the poor-little-rich-girl heiress of one of America's largest fortunes. Soon real life starts to seem like a bona fide adventure serial, complete with dramatic escapes, murderous plots, and a runaway air balloon. Will Darleen and Victorine be able to engineer their own happily-ever-after, or will the villains be victorious?

The last months, I've been a bit disappointed on the middle grade front. While there's been several books which were good and fun to read, none left me with the 'I love this book' feeling. This book finally breaks that streak.

Darleen Darling is a twelve-year-old actress in the 1914's and is the star of the very popular movie series Daring Darleen. But that doesn't make her life easy, on the contrary. The scenes and props cost almost more than they bring in, and she has to do all action stunts herself—how upset her father would be if he knew how dangerous some of them were! When the manager wants to stage a kidnapping as a publicity stunt, things take a terrible twist. Darleen happens across real kidnappers who mistake her for the sole heir of one of the richest (and deceased) women in New York. Not only is Darleen's life now truly at stake, but she's bound determined to help the real heir as well.

This book is nicely set in the 1914's and in the realm of black and white movies studios. The author does a wonderful job at bringing this ear to life and in such a way that young readers will easily sink into. I know some readers won't be familiar with the 'black-white' films, but anyone who's even cast a tiny glance at one in some way will have no trouble understanding what is going on. And while all appears to hold very true to the time period, Darleen is a character readers today can even identify with. She's a kid, acts like a kid, thinks like a kid, and has a huge sense of curiosity. She longs for adventure and is excited when she gets through something 'daring', but still is unsure and even scared when put in such a situation. She experiences the adventures kids dream of...then and now.

The pacing in this book was amazing. Every page held needed information or exciting moments or action pure. It was impossible to put down. The character depth is nicely done as Darleen and her friend have their own issues, which they need to work through.  The author even allows the characters to speak in a way they might have in 1914, which brings wonderful authenticity, which is often forgotten (or seen as 'too difficult') in today's historical middle grade novels.

To make sure I wasn't alone in my thoughts, I let my daughter dive into this one, and she loved it too.
So, this one is the first on my 2020 Favorite Reads List.