Cover Reveal: The Legacy of the Stewardship by N.R. Bergeson 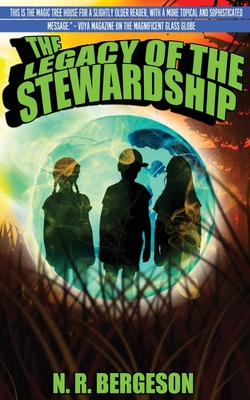 Several months after their unexpected adventure in the Amazon, Ike is not happy. He’s tired of being picked on and treated like a baby. But when the kids learn that Anatoly has kidnapped a group of innocent children and is holding them ransom in the forests of Siberia, Ike knows he has to do something. But Anatoly is demanding a steep price – that they hand over the globe.When Grandpa suffers a heart attack, Ike, Mary, and Helen know that if they don’t do something to help, the other kids will be in danger. Reluctantly, they determine to use the globe once again. Only this time they leave better prepared. Or so they thought. When they arrive in Russia, they quickly learn that their problems are much bigger than just Anatoly. When a mysterious group of people appear using a second globe, Mary is kidnapped, and now it is up to Ike and Helen to cross the vast country and find her.

Mary pulled the globe from her bag and held it for a moment.

“Why don’t you take a turn?” she said, offering the globe to Ike. “It’s probably better if we all get some practice.”

He thought about how they’d crashed into a tree the first time Mary used the globe.

Ike reluctantly agreed. Holding the globe in front of him, he spun it with his thumb. It began to rotate rapidly, and within a few seconds, it illuminated with the brilliant image of the earth’s surface.

“Ay caramba,” Helen said. “I had forgotten how intimidating this is.”

The world began to expand rapidly as Ike pressed his finger against the glass. In a matter of seconds, the schoolyard vanished around them, and they hung in space, looking down on the massive orb of the earth.
Ike gulped. He felt his finger shaking against the invisible glass in front of him.

“Here’s hoping I don’t dump us in the ocean,” he said. 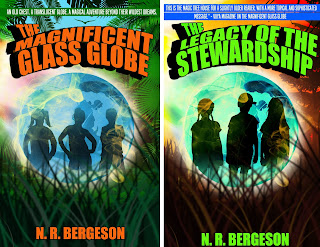 
N. R. (Nils) Bergeson is the author of the “Magnificent Glass Globe” series. From an early age, he was fascinated with the wider world, prompting him to seek a career that would give him opportunities for ample adventure. This led N.R. to spend twelve years overseas – in Siberia, Romania, Colombia, Kazakhstan, Afghanistan, and Indonesia. He’s traveled to more than 65 countries with his wife, Emily, and their three young children. N.R.’s love for writing complements his globetrotting ways well. He hopes his writing will instill a desire in his readers to take advantage of modern opportunities to see the world, learn new languages, and expand their cultural experiences. We live in a wonderful world, and it’s just waiting for us to see it.

Email ThisBlogThis!Share to TwitterShare to FacebookShare to Pinterest
Labels: Magnificent Glass Globe, N.R. Bergeson, The Legacy of the Stewardship