Never Date A Siren by Byrd Nash with Giveaway! 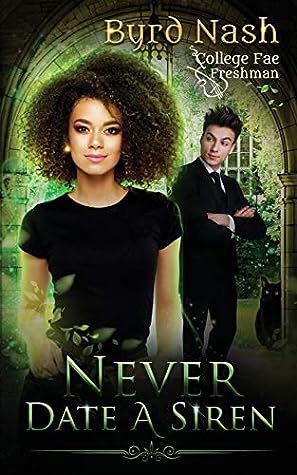 
College Life: Friends, Finals, and the Fae trying to kill you.

Attending college your first year is exciting! Unless you fall victim to a siren’s love spell.

The Leopold Otto University, in mysterious Bewachterberg, invites both humans and those from the fairy lands to attend classes.

Beware though, the administration doesn’t guarantee your safety.

American college student, Logan Dannon, quickly discovers a student body composed of creatures from mythology and folklore are tricksy and dangerous. Only if he can navigate the fae’s tangled code of honor, might he survive the semester.

Brigit, a fae runaway, didn’t plan on getting a human roommate. Or that she would be placed under a fairy debt. Will the dryad be able to save Logan from a siren’s love spell or fail the semester?

A contemporary fantasy world where beings from the Perilous Realm make university life for humans precarious. The first book in the College Fae magic series about friendships between humans and the fae.

After gaining her B.A. degree in journalism Byrd worked as a reporter for a bunch of newspapers you never heard of in small towns you never heard of. Eventually she realized she could starve just as as easily writing her own stories as reporting on local vegetable festivals.

She is owned by cats and horses.

Amazon gift card, scented candle "Cast a Spell on You", bookmarks, and a variety of crystals
Follow the tour HERE for special content and a giveaway!