Review: Prom, Magic and Other Man-Made Disasters by Rena Rocford 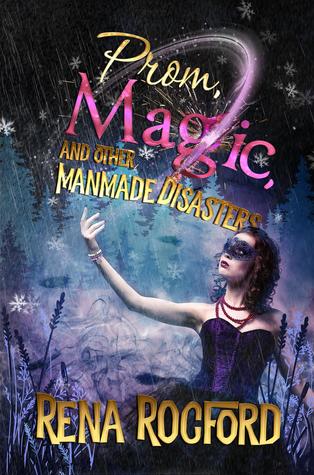 PROM, MAGIC AND OTHER MAN-MADE DISASTERS
The Settfyrian Chronicles, Book One
by Rena Rocford
Curiosity Quills
YA Fantasy

Before Tessa can confess her feelings to her long-time crush, he beats her to the punch and confesses his love—for her best friend, Maria. Missing the crush of her dreams and her stag wingman for prom, Tessa’s on the prowl to make it a night to remember, and for more than the humiliation. Determined to not be the only dateless girl at the prom in Small Town USA, she asks the new guy. He has all the qualifications of a fun date: polite, mysterious―pulse―but the way Sean talks about magic like it’s real could ruin the illusion. But desperate times call for desperate dates.

To make matters awkward, Maria insists on double-dating for the pre-prom dinner. When a wizard shows up and kidnaps Maria, things go from jealous to deadly before the cummerbunds hit the floor. He’s mistaken Tessa’s friend for a powerful mage whose blood could help him conquer his world, but he’s got the wrong girl. Using the wrong blood wouldn’t make Maria any less dead, and Tessa has no plans to let some whack-job villain from another dimension murder her best friend. Working with Sean, she tracks the wizard to his home, a land filled with strange creatures, stranger customs, and a five-hundred year grudge match between three nations ready to explode into all out war.

Tessa’s starting to think she has a chance against the wizard so long as she has Sean by her side, but his kind words and sweet smile aren’t what they seem. He’s the wizard’s son.

Teenage drama mixes with adventurous magic, sending this story into a whole new twist in the world of fairy tales, dragons and maybe getting that date for prom.

When Tessa's high school crush breaks her heart by shoving a note in her hand and asking her to give it to her best friend, so he can ask her to prom, she's sure life has turned into a disaster, but she has no clue how bad things are going to get. Not when the new boy in town takes an interest in her. Not only is the guy the son of a powerful wizard, but his father has put his sights on Tessa and plans to kill her for a power she didn't know she possessed.

Tessa is a senior, the third in a group of three girls and not exactly the most popular of her friends. Her dreams are similar to many girls of her age, making her easy to relate to. She can hold her own if forced to, but rather gives her all to support her friends. It's this mixture of spunk yet heart which makes her fun to cheer for the whole way through.

While starting out with a normal, high school scene, this tale quickly plunges into imagination pure. The first chapters fall along the dating high school drama line with the addition of Sean, who comes across awkward at best. His character was hard to get a handle on most of the book, which becomes more understandable as the plot unfolds, but still, left for an odd relationship even through the end. But then, this story embraces odd and quirky with a magical flare, creating an intriguing world which is easy to get lost in and feeds the desire to see where all of it will go next.

This fast-paced plunges into a strange balance between high school romance, magical fantasy and fairy tale re-tellings with addictive fun. And it grows stronger the more the story progresses, despite some stumbles early on. Not all questions are answered and not all aspects are clearly explained, but it is only the first in a series. and I'm looking forward to see where it goes next.

Like most mad scientists, Rena Rocford’s early works were largely met with scorn and mockery, but she bidded her time. After all, what did her fellow kindergarteners know about literature? From that day forward, Rena kept her writing on the mythical back burner as she pursued more logical goals. Today, crayons. Tomorrow, the world. She moved on to essays and egg drops, followed by experiments in shady laboratories. She tried her hand at everything, learning from anyone who would teach her. She even moonlighted as a horseback riding instructor.
Admittedly, living as a muggle brought Rena some levels of success such as completing her master’s degree, but always the stories returned, calling her to the keyboard in the dark of night. Now, having built armies from words, Rena has set her sights on world domination, one book at a time.
From her secret base in the wine country, Rena has enlisted the help of her cats, her loyal dogs, and her family―who can be relied upon to hide the launch codes at a moment’s notice. You can find Rena at her blog, follow her on Twitter, or find her on Facebook.
You can stalk her at. . .
website: http://DrFaeriegodmother.Blogspot.com

Email ThisBlogThis!Share to TwitterShare to FacebookShare to Pinterest
Labels: Prom Magic and Other Man-Made Disasters, Rena Rocford, The Settfyrian Chronicles, YA Fairy Tales, YA Fantasy