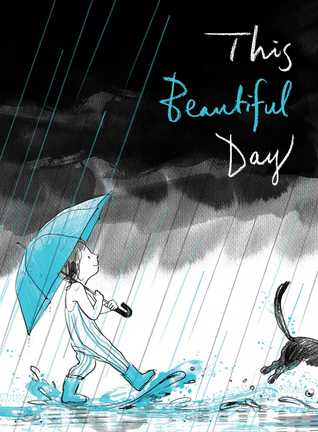 
In the tradition of We’re Going on a Bear Hunt, acclaimed author Richard Jackson and award-winning illustrator Suzy Lee prove you can chase away any grey and gloomy day with just the right attitude, and a little bit of color.
Why spend a rainy day inside? As three children embrace a grey day, they seems to beckon the bright as they jump, splash, and dance outside, chasing the rain away. The day’s palette shifts from greys to a hint of blue, then more blue. Then green! Then yellow! Until the day is a technicolor extravaganza that would make Mary Poppins proud. A joyous homage to the power of a positive attitude.


This book takes a grey day and brings out the sunshine with whimsical fun.

It's raining outside, something that would keep many kids gloom and bored. But these kids refuse to let the weather get them down. It's a beautiful day, and it's all in the attitude to make warmth shine through until everyone is caught up in the joyful mood.

One read through this book and smiles are guaranteed. With determination and simply a great attitude, grey turns into a rainbow of colors. It's a lovely message that hits home through the simple text and engaging illustrations. There aren't many words, just a short phrase or two on each two-page spread. The wording offers exactly enough to set the base, while the illustrations take on the rest. The combination is extremely well-balanced and allows young readers to flip through the pages and enjoy the story even on their own.

The illustrations bring this book to life. Starting with monotone grays and whites, the gloominess clings to the pages. Little by little, as the characters dive into cheerful thoughts and let their positive attitude overflow, colors dance in between the dark lines. By the end, a rainbow of brightness beams from every picture making the memory of anything mundane disappear. A gentle dose of fantasy glides in the last half of the story, adding a lovely sense of adventure, freedom and imagination. As the characters take off in the last scenes, it's hard not to want to join in and chase the beautiful day along with them. And maybe that's exactly what young readers should do.

Richard Jackson is a long-time editor at Atheneum Books for Young Readers and the critically acclaimed author of Have A Look, Says Book, illustrated by Kevin Hawkes. In starred reviews, School Library Journal touts it as a  ". . .celebration of sharing a book together" and the Publishers Weekly proclaimed it "a shoe-in for the bedtime rotation." He is also the author of All Ears, All Eyes, illustrated by Katherine Tillotson. Recognized for his distinctive taste in children's literature, in 2005 he was named as the ALSC May Hill Arbuthnot HOnor Lecturer. He lives with his wife and near his grandchildren in Towson, Maryland.


Suzy Lee  is the critically acclaimed illustrator and author of many books for children including Wave, which was awarded the Gold Medal for Original Art by the Society of Illustrators and was a New York Times Best Illustrated Book; Shadow, which was a New York Times Best Illustrated Children's Book; and Open this Little Book, which was awarded the Boston Globe-Horn Book Award for Excellence in Children's Literature (Picture Book Honor Winner). She lives and works in Seoul, South Korea.