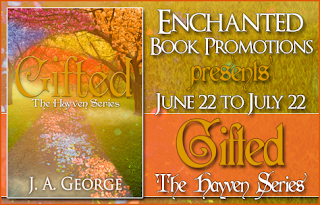 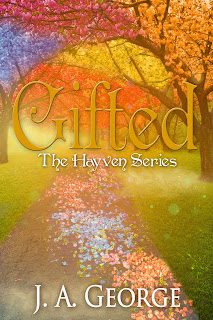 “Why do birds fly? Why do lions hunt deer? Why does the sun shine and the moon glow? Because it must. I wish I could tell you why, I truly do. It mustn’t be easy, such pressure weighted on such young shoulders, but we do not always choose the lives we must lead.”
Avery Gray had no choice but to be different. She was not born that way; she was chosen.
After having met a special, silver-haired woman, and the handsome and enigmatic Theodore-James Connors, Ava finds herself in Hayven, a city separated from the rest of the world, where only gifters – ordinary people with extra-ordinary gifts – can go. With Theo, his friends, Hayven, her gift, and the ability to ‘travel’ in different colours, Ava must now accept that she can no longer classify herself as normal. As friendships develop, and Theo and Ava become closer than she anticipated, it turns out her new gifted life comes with a catch. With no choice or say on the matter, Ava must save a city she is starting to fall in love with; a city that has almost begun to feel like home.

Toni laughed. “How would you know!? You’ve never dated anyone!”
She had me there. Toni wasn’t deliberately being nasty, she was simply stating facts. I was now nineteen years old and I had never had a proper boyfriend. A few quick, shy kisses from a couple of valentines’ years ago didn’t count in Toni’s eyes. It never mattered to me, having a boyfriend and all of that couple business. I just figured I’d get one when the time was right. Boyfriends just weren’t something I was interested in at the moment. Don’t get me wrong, I’m not a cynic or anything, but I’m also not a believer in fickle love. You know, like those girls who claim they’re in love with the guy they met at the bookshop five minutes ago and are convinced they’ll have his babies. You know exactly what I’m talking about; we’ve all met one. I’m not into that kind of ‘love’, I’m more into long-lasting things. Call me old-fashioned, but I wouldn’t mind if my first official boyfriend was my last.
Toni however, was a different matter. She’s had six proper boyfriends to date and has slept with five of them, and Toni’s got it into her head that what Toni does, everybody should do. Toni isn’t exactly Huxton’s next top model as she’s got rather thin brown hair - which she’s always complaining about - and a fairly large nose; but she does have lovely long eyelashes and full lips. However, it was her confidence that landed her boyfriends.
I, if you hadn’t already guessed, was boyfriend-less and a virgin, both of which according to Toni, with me being almost twenty years old, just wouldn’t do. She’s been trying to match me up with boys ever since we started university.
“So what is your type then?” Toni asked.
“I –”
“- don’t know?” she finished. “Yes, you say that every time I ask you.”
“Maybe you should stop asking then?”
“Rest assured, I will when I get an answer I’m satisfied with, but until then… Oh, come on, everyone has a type. I don’t know why you won’t just tell me –”
I was hoping the pause Toni had taken was either from a distraction in the distance or her finally letting the topic go, but that of course was too good to be true. Toni had come to an abrupt halt only to swivel round and look me in the eyes.
“Wait,” she ordered. “Is your type…girls?”
“What?!”
“Oh my gosh, it is, isn’t it?”
“No! No, it’s not!”
I couldn’t find the words to defend myself because I was too busy struggling not to laugh, but I knew that if I did laugh Toni would think she was right. Which she wasn’t.
“Come on, you can tell me. It’s not like I’ll mind or anything!” She suddenly fixed me with a serious look. “This is a new era Ava, one that is very accepting of –”
“Okay Toni, let me stop you right there. I promise you that my type, if I even have one, is male."

All about J. A. George. . .
J.A. George is the author of the four-part series, GIFTED: THE HAYVEN SERIES. Jessica spent years of her life reading book after book before sitting on her bed one morning, opening her laptop and typing Chapter One into her word document. Now, not only does she read book after book, she now writes book after book too. When she's not writing, she's trying to break her record of finishing a tub of Oreo ice cream in less than forty-five minutes.You can contact her at Jess.george@hotmail.co.uk

Email ThisBlogThis!Share to TwitterShare to FacebookShare to Pinterest
Labels: Gifted, J.A. George, The Hayven Series, YA Dystopian, YA Fantasy, YA Romance