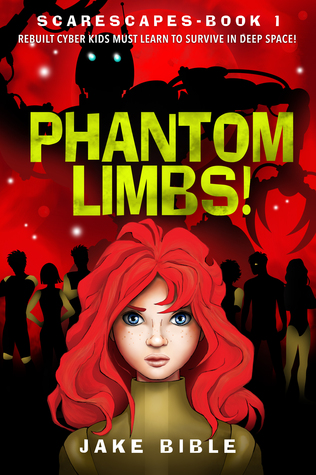 On the Earth Colony Asteroid Scorpio, something has gone terribly wrong. Millions of light years off course and 900 years late, the ship’s AIs wake up only seven kids, leaving the adults stuck in cryosleep! Damaged from the long journey, the AIs must repair the awakened seven with the only thing available–cybernetic robot parts. Along with learning to function with new cyber parts, the all-kid crew must unravel the mystery of what went wrong with the Scorpio. As if the nightmare of deep space isn’t enough, the kids soon find themselves battling the ship’s maintenance robots while their cyber parts begin taking on a life of their own!

This book reminded my a bit of 2001: A Space Odyssey but, of course, geared for children and with some interesting twists. The story starts right there where the trouble begins. A red headed thirteen-year-old girl, who is arguing with the computer about having the right to be called Isla on her birthday instead of Captain, is very uncomfortable with her birthday. Although thirteen, a mistake has left her hibernating for 1000 years. She and a handful of kids have awoken from their sleep, but most of the 10,000 head crew (adults) has not. With the help of the computers/spaceship, the kids have taken over the roles of their parents in running the ship.

There isn't much back story, and the author does a great job of dropping in the bits and pieces of information needed as the story progresses. The characters themselves are presented a couple at a time, so the reader gets a chance to meet each one before moving to the next. The kids are in some ways mature for their age, but still have a nice level of childishness mixed in, especially in how they deal with each other.

The plot itself is tightly woven and well paced. The tension mounts as the story moves along, going from one unexpected turn into the next. There are just enough descriptions to picture the spaceship, while still leaving enough room for a kid's imagination to take flight. And yep, there were a couple scenes where I gulped, hoping the kids would make it through alive.

The only trouble I had was with the dialogue. Although it's believable, well written and very fitting for the age group, there were times when simply too many of the characters were throwing in their tidbits and I got a little lost as to who was who. But the exchanges were humorous and each character has their individual voice.

As for the ending. . .now, that's a real surprise and a super twist. It hooked me enough that I can't wait to get my hands on the next book and see what happens to these kids as another adventure starts.

Jake Bible lives in Asheville, NC with his wife and two kids.
A professional writer since 2009, Jake Bible has a proven record of innovation, invention and creativity. Novelist, short story writer, independent screenwriter, podcaster, and inventor of the Drabble Novel, Jake is able to switch between or mash-up genres with ease to create new and exciting storyscapes that have captivated and built an audience of thousands.
He is the author of the bestselling Z-Burbia series for Severed Press as well as the Apex Trilogy (DEAD MECH, The Americans, Metal and Ash), Bethany and the Zombie Jesus, Stark- An Illustrated Novella, and the YA horror novel Little Dead Man.
Find him at jakebible.com. Join him on Twitter and Facebook.