Excerpt: Whispers in Eternity by Jacinda Buchmann with Giveaway 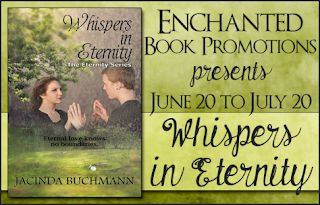 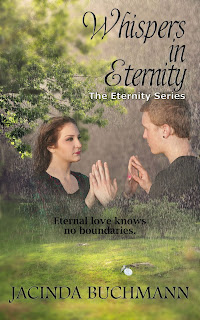 
Life—the existence of truly living—doesn't begin until you close the door on the past.My post-high school goals had been right on track—literally. But when the doctors said that I could no longer run, I was faced with two choices—give up or change direction.Unexpectedly, singing became my new passion—a passion fueled by the most gorgeous guy I had ever met.I can't say that I believe in love at first sight, but after meeting Gavin, I can now say with certainty that I believe in recognition at first meeting.He was unquestionably my soul mate.Only one obstacle stood in our way.He was a ghost.

Malik chuckled. "Girls are way more emotional and sentimental than guys are. A guy would hear this song and be like, 'Man, that jam's got rhythm,' but girls be all like, 'Ah, baby, they're playin' our song. It's so sentimental and sweet.'"
"Don't you go and ruin my favorite song, Malik," I warned, trying to hide a grin. "I'm tellin' you right now, you bash my song and it's a deal breaker. Our whole BFF, let's-hang-together-at-school status will be done."
"Well, I certainly don't want to risk that. Okay, then, your favorite song—what's it called again?"
"'Falling Like Snow.'"
"Right. Your favorite song, 'Falling Like Snow,' is now my favorite song. See? Easy. Are you ready to do this thing?"
I had just pulled into the school parking lot and put the gearshift into park. With the engine still running, I stared at the multitude of students piling out of cars and heading for the building. Was I really ready for this? I had spent my entire junior year either in the hospital or doing homeschooling. What if I completely sucked at making stupid small talk and pretending that I cared about the hottest actors in Hollywood or who was going with who to the homecoming dance?
"Um, you know, we still have time to back out. I'm sure if I told my mom I want to do homeschool again, she'd be in full support. And you could do it with me. We could be homeschool buddies, right from the comfort of my aunt's kitchen."
"Come on, Noelle. You don't strike me as a girl who cowers down and gives up that easily. You can do this. We can do this. I'll be right by your side. Besides, we're BFFs now, remember? If I'm going to face the first day of school, you have to face it with me."
"Fine." With a sigh, I grabbed my backpack from the back seat and hopped out of the truck. "But if I hate it," I said as we strode toward the school, "I'm totally out of here."
"Deal. But you have to give it at least a week, because if you leave, I'm leaving with you. It's been six years since I've gone to a real school, and I'd like at least one week to see if it's just as awesome as I remember."
"Awesome?" I couldn't help but laugh. "I think your memory must be a little clouded."
"Hey, I like living in my delusions, okay? So, do we have a deal? You'll give it a week?"
"Deal."
When we reached the front walk, though, I couldn't help but think that yoga pants, fuzzy socks, and my aunt's kitchen sounded a lot more relaxing than the chaos we were about to walk in to. 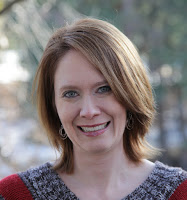 Jacinda Buchmann lives in Arizona with her husband and three children. She graduated from Carroll College, in Helena, Montana, with a B.A. in elementary education and later received a Master’s degree from Northern Arizona University, in school counseling. After spending several years as a teacher and later a school counselor, she now spends her time writing, any free chance she can get, that is, when she’s not spending time with her family or creating a new concoction in the kitchen.

Email ThisBlogThis!Share to TwitterShare to FacebookShare to Pinterest
Labels: Giveaway, Jacinda Buchmann, The Eternity Series, Whispers in Eternity, YA Fantasy, YA Paranormal