Today's book comes from a well-known, Japanese children's book author. If you've watched Spirited Away and enjoyed it, you'll have a pretty good handle on the atmosphere of this one. (But then, it's basically the same author...or at least, the movie is based on one of her books...so, no surprises there). While there is a girl pictured on the front of today's cover, the main character is actually a boy named Kazu. The girl holds a huge importance in this plot, though. Riding on the wings of fantasy, spirits and the Japanese culture, I was more than excited to pick this one up and take a peek.
Ready to see what I thought and learn more about it? Of course, you are! 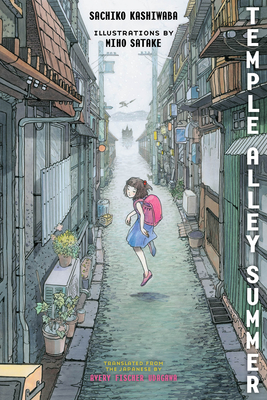 TEMPLE ALLEY SUMMER
by Sachiko Kashiwaba
Illustrated by Mino Satake
Translated by Avery Udagawa
Restless Books
Middle Grade Fantasy
ages 8 to 12
COMING...
JULY 6th!!!
From renowned Japanese children's author Sachiko Kashiwaba, Temple Alley Summer is a fantastical and mysterious adventure filled with the living dead, magical pearls, and a suspiciously nosy black cat named Kiriko featuring beautiful illustrations from Miho Satake.Kazu knows something odd is going on when he sees a young girl in a white dress sneak out of his house in the middle of the night--was he dreaming? Did he see a ghost? Things get even stranger when he shows up to school the next day to see the very same figure sitting in his classroom. No one else thinks it's weird, and, even though Kazu doesn't remember ever seeing her before, they all seem convinced that the ghost-girl Akari has been their friend for years!When Kazu's summer project to learn about Kimyo Temple draws the meddling attention of his mysterious neighbor Ms. Minakami and his secretive new classmate Akari, Kazu soon learns that not everything is as it seems in his hometown. Kazu discovers that Kyoto Temple is linked to a long forgotten legend about bringing the dead to life, which could explain Akari's sudden appearance--is she a zombie or a ghost? Kazu and Akari join forces to find and protect the source of the temple's power. An unfinished story in a magazine from Akari's youth might just hold the key to keeping Akari in the world of the living, and it's up to them to find the story's ending and solve the mystery as the adults around them conspire to stop them from finding the truth.
GOODREADS    /     AMAZON   /    B&N
MY TIDBITS
Fantasy, spirits and adventure mix into a lovely tale as a boy tries to discover the history behind his street and finds so much more.
Kazu can't believe his eyes when he sees a girl in white leave their house one night. She's got to be a ghost, but suddenly, she appears as a fellow student in his classroom, and everyone claims she's been part of the class and school for years. She's even living in a house right near his own, and the other neighbors swear this is nothing new. But Kazu knows it's not true. He couldn't forget her and only her from his entire life. Plus, she appears to be living with an invisible mother. At least, he can't see the person. When his class runs across an old map, where it shows that his street once carried the name 'Temple Alley', his search for the truth begins. And what he uncovers not only is a well-hidden secret, but the beginning of an amazing adventure.
I was really looking forward to reading this, since I love these types of tales. At first, I had a difficult time settling into this book, though. It is translated from the original Japanese story, and the different form of story telling is obvious in the writing style. There's a lot of telling, and it takes a couple chapters to sink into Kazu and the setting. The story unfolds relatively quickly, and the author lets it come across directly. It's a different flair than the tempo and flow of plots written in the western world, but then, this is one reason I enjoy reading works from other cultures. And it definitely draws in as the story goes along.
Kazu is a gentle boy with a huge heart. His concern for others is inspiring as is his determination. He mixes nicely in with the other characters and is hard not to cheer for as the story continues. His own family is there but doesn't play as important a role as others. There is an old woman, who especially wins over with her secretive ways. Plus, the other characters who join in as the adventure continues, add just the right amount of mystery and friendship.
This is a lovely read with tons of imagination...the type which invites to dream. Illustrations dabble in every now and then for a nice touch. The book holds a similar flair to that of Spirited Away, but then, considering this author's work, The Marvelous Village Veiled in Mist, was the main influence behind that movie, it isn't surprising. Fans will definitely want to take a peek at this adventure, too, because it is a lovely read.
on May 01, 2021