Happy Book Birthday, Some Creatures Have All the Luck by Ana Gerhard!!!

Ready for some music? Today's read introduces young readers to the famous composer, Antoni Vivaldi and his work, Four Seasons. Of, at least, the winter section, since I only hit one of the four books in the series.
I was one of those kids, who spent a lot of time around classical music thanks to years and years and years of piano lessons (around 12). And while I enjoyed playing, I'll admit that when the music teacher at school pulled out something like Vivaldi's Four Seasons and made us sit there and listen, I really had a hard time enjoying it for more than a few seconds. And those around me were worse. So, when I stumbled over this book, I was curious how it'd be done. While I fully support exposing kids to classics, it's a tough job to successfully do.
This book hits the task from several different directions at once. The book comes with several free downloads (so not everything has to be purchased separately). But go ahead and take a look at it yourself. 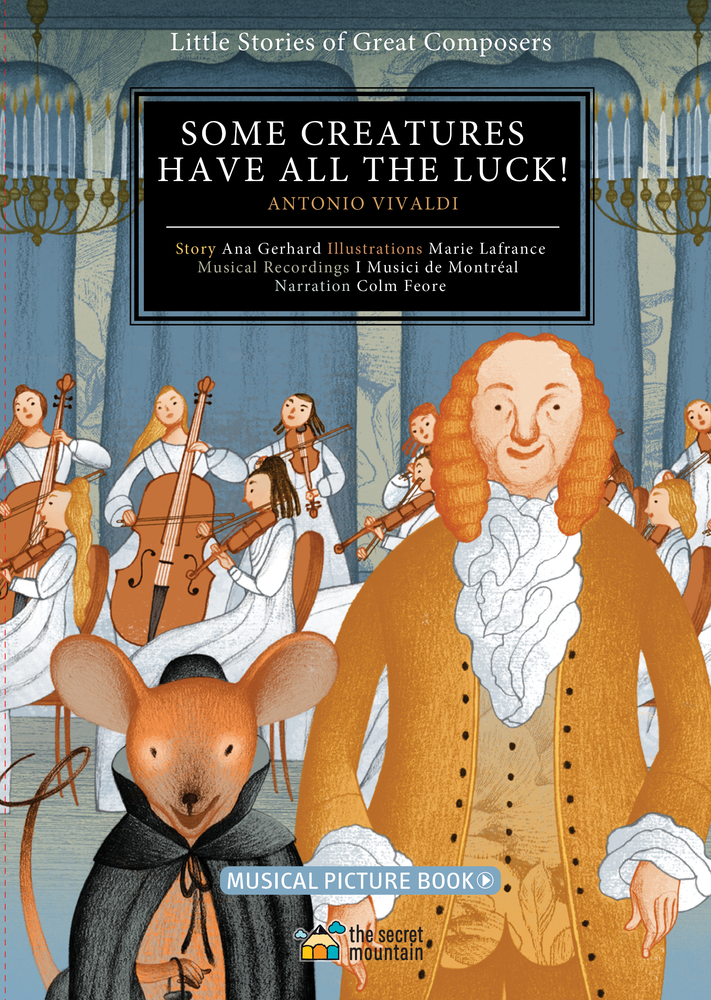 SOME CREATURES HAVE ALL THE LUCK
Antonio Vivaldi
by Ana Gerhard
The Secret Mountain
Picture Book / Music
36 pages
ages 4 to 8
Little does Minim know that this task is fraught with danger, since there happens to be a tomcat in the building who is always on the lookout for the next meal. Luckily, it’s also home to the great composer Antonio Vivaldi, whose music will prove to be irresistible! Included are introductory notes on the composer along with recordings of the narrated story and the composition “Concerto for Winter” from “The Four Seasons.” A unique code for the digital download of the recordings is also included.
GOODREADS    /    THE SECRET MOUNTAIN     /     AMAZON
BOOK BLINK
* part of 4 book series about Vivaldi's Four Seasons
* cute story about a mouse's adventures
* music and narration
* fun to follow illustrations
* teaches a bit about Vivaldi
MY TIDBITS
Antonio Vivaldi's Four Seasons is introduced to young readers through an adventure, illustrations, a lovely narration, the music, and a very cute mouse...in a way which brings the music to life.
This book covers the Winter part of Vivaldi's Four Seasons and is one book in a four book series. I didn't read the other three books, but that's not really necessary since this book is its own adventure. Well, that's ignoring the fact that all four books are necessary to round off the glimpse at this composer's work.
While this book does take a quick glance at Vivaldi, it is really a quick glance. The mouse gets center stage in these pages as he deals with a very determined Tom cat. It's a quick paced tale...much like the music...and does an amazing job at giving Vivaldi's piece a life young listeners will enjoy.
The book can be used in many ways. Firstly, it is a story like a normal picture book, and one that will hold readers interest all on its own. There is a quick look at Vivaldi along with some details, but it's not in depth. Then, there's the narration/audio book version, which can be downloaded. The narrator does a lovely job at reading the story while music plays in the background. But there's also the possibility of playing the music while the book is read (either out loud or gazed at).
This musical version (music in the background while book be read aloud or gazed at) impressed me the most. The music matches the tale perfectly and builds an amazing base for the imagination. It's easy to get lost in both and see the events happening as the music plays. It's an inviting way for young readers to learn to see...what they'd most likely deem, otherwise, as boring...the piece in a whole new light.
While there could have been a pinch more about Vivaldi, I'm suspecting the four books round off that end better when placed together. But from the view of bringing children closer to a type of music they'd, otherwise, turn away from, this book is very well done and a treat.
on May 02, 2021

Email ThisBlogThis!Share to TwitterShare to FacebookShare to Pinterest
Labels: Ana Gerhard, Some Creatures Have All the Luck, Vivaldi's Four Seasons