Review: Warren the 13th and the Thirteen-Year Curse by Tania del Rio 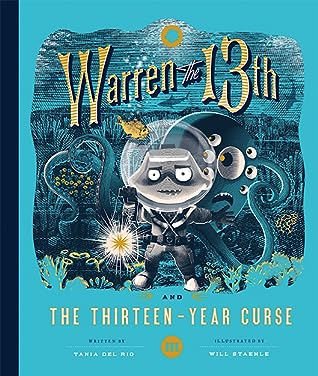 WARREN THE 13TH AND THE THIRTEEN-YEAR CURSE
Warren the Thirteenth #3
by Tania del Rio
Illustrated by Will Staehle
Quirk Books
240 pages
ages 8 to 12
An illustrated middle-grade fiction series with Gothic and Victorian overtones featuring the misadventures of a cursed 12-year-old bellhop trying to save his family's hotel from the clutches of evil.At the conclusion of the second book in the Warren the 13th series, The Warren Hotel had transformed into a giant ship, and set sail for the open seas! When Warren 3 opens, Warren is adjusting to the demands of running a floating hotel and is planning his 13th birthday party when disaster strikes--the hotel is shipwrecked on a strange island. To make things worse, his octopus-like friend Sketchy is kidnapped by a travelling circus! Warren and his friends must solve a series of riddles to find the next location of the circus and rescue their friend before it's too late. Along the way, they meet a new cast of characters, including some elderly pirates, a sea witch, a talking clam, and a giant sea monster. As Warren pursues Sketchy's kidnappers, he will learn the truth of his friend's mysterious origins--as well as one final secret of the Warren Hotel.
GOODREADS    /     AMAZON     /     B&N    /     BOOK DEPOSITORY    /    KOBO
BOOK BLINK
*  packed full of illustrations
* last book in a trilogy
* quirky characters
* exciting from start to finish
* tons of friendship and family goodness
MY TIDBITS
I did not read the other books in this series, and this is the last in the set of three. But I still didn't have much trouble sinking into the tale and enjoying the characters with every single of their wonderful oddities and good natured hearts.
Warren the 13th is the bellboy of his family's hotel, and since the death of his parents, tries to keep the hotel running. In this installment, the very special hotel and its occupants have made their way through the last adventure, and the hotel has now transformed into a ship. Warren, however, is about to have his 13th birthday and is about to release the 13 year curse. And this seems to strike immediately as they find themselves shipwrecked on an island with feisty pirates at a special, pirate retirement home, and Sketchy (their friend, the octopus) is considered the deep regarded beast of the deep...which he may or may not be. Anyway, when he's kidnapped, things really go nuts.
This is a super fun read and packed with quirkiness and adventure. It wasn't quite as over the top as I thought it'd be, but really follows an exciting plot. The hotel is special but not as much for its amazing, transformation abilities as for the individuals who have taken residence inside. Warren might have lost his parents, but these occupants form a unique and golden family. Each one, despite their spikes and crinkled personalities, are the most valuable friends a kid like Warren could have.
Each page is originally formatted into a more columned, newspaper style, instead of the block of text which usually forms each page in a novel. Plus, there are oodles and goodles of illustrations peppered on each page. There are even puzzles and riddles, which the reader can help Warren solve, which mold seamlessly into the tale and never give it a puzzle book feel (plus, there are only a handful of these). Still, it's a super fun mix.
And to top it off, the adventure is really engaging and draws in. Excitement rolls through at a very steady pace and keeps the tension high until the end. This weaves around simple, wholesome values of loyalty, kindness, selflessness, and keeping a positive attitude. In other words, this is a wonderful read, which not only middle graders are sure to enjoy.
on February 06, 2021

Email ThisBlogThis!Share to TwitterShare to FacebookShare to Pinterest
Labels: Tania del Rio, Warren the 13th and the 13-Year Curse, Warren the Thirteenth, Will Staehle