It's not October, yet, but today's book definitely fits the bill for strange, creepy, gothic, and odd romance. It's sold as Six Feet Under meets Edward Scissorhands, and it oddly enough fits the description pretty well.
So, if you're into something a little different, read on! 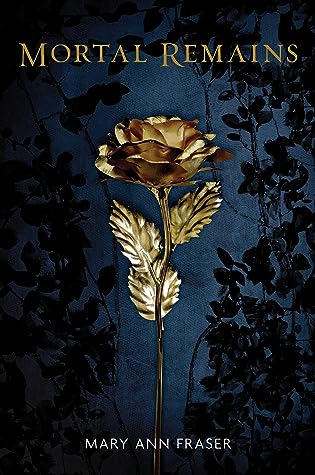 MORTAL REMAINS
by Mary Ann Fraser
Sterling Teen
Young Adult Paranormal
368 pages
Morticia. Ghoul Girl. Freak. Eighteen-year-old Lily McCrae has heard it all. But despite what the bullies say, she loves her job doing makeup for the dead for her family’s failing funeral home business. Lately, though, Lily’s best friend Mallory is too busy reinventing herself to hang out, her stepbrother Evan is preoccupied with college applications, and her father is pushing her into taking over the family business without even asking her opinion, so she feels lonelier than ever. She finds herself spending all her time in the prep room talking to her “clients.” After all, the dead are the only ones who really listen.Then the neighboring house is leveled in an explosion, dredging up memories of Adam, the boy who lived there and saved her life the day of the accident that left her scarred and disabled, and of the things she saw there that she just wanted to forget. When she, Mallory, and Evan go exploring and find a mysterious hatch in the rubble, they discover that someone’s been trapped inside. Someone who says his name is Adam. Trouble is, Adam has been missing for four years. And this Adam doesn’t have any memory of her and seems to be keeping a lot of secrets. As she spends more time with him, she can’t help her growing feelings even as his unwillingness to be open leaves her troubled.Lily is forced to reconcile her feelings for Adam as together they delve into his mysterious past while she also struggles to figure out what she wants out of life and tries to fix her rocky relationships with Mallory and her parents. Will Lily ever decide who she wants to be? And is love enough to overcome truth?
GOODREADS    /     AMAZON    /     BOOK DEPOSITORY    /    B&N
BOOK BLINK
* carries a delicious, gothic flair
* true love might defy all...or might not
* mystery and a touch of governmental intrigue
* deals with the meaning of family and life
* slow build romance
MY TIDBITS
With a main character, who does the make-up for the dead, this is a tale which dances in the shadows with grace and mysterious allure.
Lily's family owns a small, local morgue, and while she's still a high school student, she's also responsible for preparing the deceased for viewing. She takes her job to heart and gives her all, but then, she always has felt more comfortable being around the dead than the living...something which she's been bullied for all of her life. Her father wants her to continue the business, although it's going under, but she's not sure she wants to, anyway. When an estate several blocks away literally explodes,  she saves a boy, whose memory is half missing. He seems to be her long-lost childhood friend, who strangely disappeared years before.
The beginning of this book is so grabbing. Lily is a teen but works every free moment at her family's morgue and prepares bodies for the viewings. It's a strange job, but Lily is talented, has a heart of gold, and pays the dead a respect that can only be admired. Her insecurities and awkwardness in the real-life social arena make her easy to identify with and a true heroine to root for. She has everything a good character needs to be likable until the end. Add the exploding house and mystery around a strange boy she rescues, and it starts out with a bang.
This is a woven tale, which allows the characters to gain depth, personality and face their own problems, while focusing on Lily as she learns to accept herself and find her own voice in the world. As this more personal, character development unfolds, the author brews a mystery in the background, which wraps in a bit of intrigue along with it. This makes the book feel as if it has two plots. The first half of the book gets the tale going on Lily's personal side, but then falls into the more tense mystery and intrigue toward the second half.
There's a lot happening in this read with Lily's inner development, her family, relations with her friends, and Adam's mystery. And I think this is what also caused a slight lull about one-third of the way through. The author spends quite a bit of time building the relationship between Lily and Adam, and allowing Lilly to gain quite a bit of depth, before diving into the action, kidnappings, dark SUVs, and danger. The ending wrapped everything up a little quickly and did skip over a bit of logic, but I still enjoyed it quite a bit and appreciate the originality of it all.
In other words, this is a read, which includes both something for character depth fans as well as acting and intrigue lovers. It's bitter sweet, dark, has teen-angst, a touching romance, and dives deep into the problem of learning to be true to yourself. And all of that with a flair of its own.
And here she is...
Award-winning picture-book author-illustrator Mary Ann Fraser makes her YA fiction debut with MORTAL REMAINS. Mary Ann has written and/or illustrated over 60 books for young readers. Mary Ann’s books have been Junior Library Guild Selections, and have been awarded Book Links Book of the Year, IRA Young Readers Choice Award, and American Booksellers’ “Pick of the List.” She is a long-standing member of SCBWI as well as one of its Regional Advisors, and a founding member of the Children’s Authors Network. Publishers Weekly called her recent picture book No YetiI Yet "wintry fun for the cryptozoologically inclined” while Kirkus praised last year’s Graham Bell Answers the Call, saying, "Calling out to history buffs and scientists, this will inspire young inventors.” Mary Ann lives in Simi Valley, CA.
on February 17, 2021