It's time for a little magic and more than a bit of adventure! Today's review is another middle grade read, and this one is part of a new series.  Now, I'm not a huge unicorn fan...more of a spitting fire dragon or arrow shooting elf or magic throwing mage kind of girl. As is my own daughter. But this one is definitely for unicorn fans who also love adventure, magic and a imaginative read....oh, and it has more than a few colored illustrations.
And no worries. There aren't any farts of rainbows or sprinkles or glitter, either. 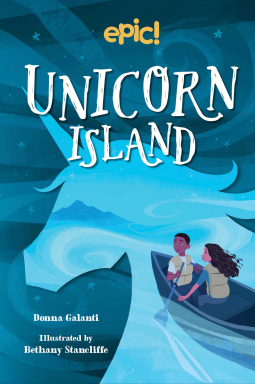 UNICORN ISLAND
by Donna Galanti
Illustrated by Bethany Stancliffe
Andrews McMeel Publishing
Middle Grade Fantasy
224 pages
ages 8 to 12
Beyond the mist lies a magical secret waiting to be discovered . . . From Epic! Originals, Unicorn Island is a middle-grade illustrated novel series about a young girl who discovers a mysterious island full of mythical beasts and darker dangers!When Sam arrives in Foggy Harbor, population 3,230, all she can see is a small, boring town that’s way too far from home. And knowing that she’s stuck there all summer with her grumpy Uncle Mitch only makes things worse. But when Sam discovers a hidden trapdoor leading to a room full of strange artifacts, she realizes Foggy Harbor isn’t as sleepy as it seems. With the help of a new friend, Sam discovers an extraordinary secret beyond the fog: an island of unicorns whose fates are intertwined with hers.
GOODREADS    /     AMAZON    /    B&N    /    BOOK DEPOSITORY
BOOK BLINK
* peppered with cute illustrations
* large print for easy reading
* quick tale (despite page number)
* on the lower end of middle grade (ages 7 to 10)
* magic and unicorns and adventure
* strong heroine
MY TIDBITS
This is the first book in a series and sets the scene as well as the characters up nicely for upcoming adventures.
Sam is shipped off to her uncle's for the summer, since her mother has a concert tour in Europe, but Sam doesn't know her uncle well...only that he was grumpy. When she arrives, he wasn't expecting her and would like her to leave but can't get ahold of her mother. Sam does her best to deal with the situation and soon runs into a boy in town. They quickly become friends. When the two discover  a trap door leading to a secret room in the basement, they learn that there's a lot more to Sam's uncle and the fog surrounding the house than they thought.
Sam is quite a normal girl, and it's easy to connect with her when she's shipped off to an uncle she doesn't know. Her bravery and desire to be kind despite his grumpiness make her even easier to cheer for. Her new friend is the kind of person, who's ready for adventure and has a good heart. Their friendship is enjoyable, and they make a great duo.
The tale itself moves along at a steady pace with enough descriptions to bring the world color and life. The text is fairly simple, making it perfect for the younger end of the middle grade range. I wondered about the 200+ pages, but the font is fairly large, meaning there isn't an overwhelming amount of text on each page. Add the multiple illustrations to the mix, and it's a quick, easy read.
This is the beginning of a series, and the author uses this book to set the stage for the upcoming adventures. It took awhile for the adventure to really get going (after a bit more than a third of the book), but once it does, it dives into magic pure. I did find that the island and its creatures were much too easily accepted by Sam and her friend, and a few other moments happened without much depth or thought. It made some things to simple and a little hard to believe. But it's a cute tale, which magic and unicorn fans are sure to enjoy.
All about Epic!
Epic! Original: the leading digital library for kids, used by over 10 million in homes and schools. Expert Approved: vetted by educational experts to ensure high-quality, age -appropriate material. Bonus Educational Section: features interesting facts about the story in a More to Explore section.
https://www.getepic.com/
on February 09, 2021