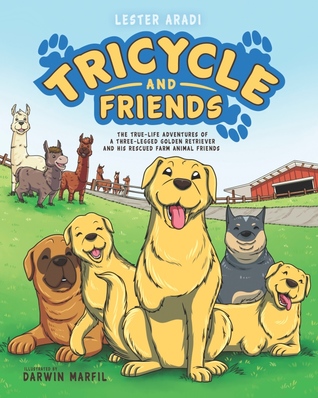 A dive into these pages brings the reader to a place, where animals finally find a home and children some joy.

This book is based on an existing type of farm, which adopts rescued animals and helps children with needs to spend time with them and develop relationships. While narrated through the eyes of Tricycle, a golden retriever with three-legs who is adopted and finds his way around the farm, the book slides through the various animals and children, illustrating the various problems individuals can face—bullying, friendship, death, physical challenges, and much more.

This book works well as a read-aloud. The text is a bit heavy to be read to the youngest audiences, but it does work nicely for a story time. Those who have a fairly good grip on reading can hit it themselves. It tells the story of Tricycle and how he arrives at his new, adoptive home. The animals there each of their own history or problems, but that doesn't stop them from being kind, open and friendly. It's a place full of hope and that radiates from every page.

While it does follow a light plot, I had the impression that the book does a better job at simply exposing young listeners to a place where these types of animals and children, who have their own problems, come together and support each other. The book doesn't hit only one topic, but slides from one to the next. In some ways, it was quite a stack and made me wonder how many tough issues can be hit upon in one picture book. So, I would recommend using this one only for those children ready to hit such discussions (ages 5+). But the problems aren't the point of this book, either. Instead, this book opens up discussions and simply wakes awareness of the possibilities such a place offers.

The illustrations are well done and fun to experience. As an extra bonus, however, the real life photos of situations mentioned in the book are placed on the last pages. And it's this shove between a story and reality, which makes the book that much easier to connect to.


Tricycle and Friends was presented in an online article with People.com. You can read it and discover more about this book and its authors here!