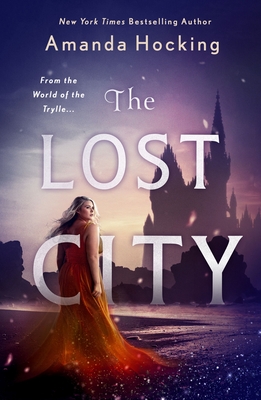 New York Times bestselling author Amanda Hocking returns to the magical world of the Trylle with The Lost City, the first book in the final Trylle arc.
Nestled along the bluffs of the forested coast lays the secret kingdom of the Omte—a realm filled with wonder...and as many secrets.
Ulla Tulin was left abandoned in an isolated Kanin city as a baby, taken in by strangers and raised hidden away like many of the trolls of mixed blood. Even knowing this truth, she’s never stopped wondering about her family.
When Ulla is offered an internship working alongside the handsome Pan Soriano at the Mimirin, a prestigious institution, she jumps at the chance to use this opportunity to hopefully find her parents. All she wants is to focus on her job and the search for her parents, but all of her attempts to find them are blocked when she learns her mother may be connected to the Omte royal family.
With little progress made, Ulla and Pan soon find themselves wrapped up in helping Eliana, an amnestic girl with abilities unlike any they have ever seen before—a girl who seems to be running from something. To figure out who she is they must leave the city, and possibly, along the way, they may learn more about Ulla’s parents.

In an original mix of fantasy and reality, secrets abound and open up to what promises to be an interesting series.

Shortly after her birth, Ulla was abandoned at an inn by a woman, who only left her first name. Years later, Ulla is a happy young woman, who has worked hard and made many close friends and even found something like family. Still, she wonders about her true origins. As a troll, she lives among the magical race, which living mostly separate from the modern human world, is slowly going extinct. In hopes of helping her research, she lands an elite internship in one of the magic world's most renowned centers. As a troll of mixed blood, she's grudgingly welcomed. As her research reveals more secrets than answers, and a strange girl runs across her path, Ulla begins to believe that there is much more to her and the magic world than they are being taught.

I've read a couple of this author's works before—some I've enjoyed more than others—but I'm always amazed by the variety of tales she tells. In this one, her imagination definitely takes flight and develops a rich world, which offers all sorts of possibilities for a series.

The first chapter does a great job at allowing the reader to immediately gain sympathy for the main character and launch into a gripping beginning. It has a true, fantasy world beginning with the inn and a warrior suddenly appearing at the onslaught of a storm. While the tension and mystery is immediately set, the tone hangs toward family and warmth, allowing the reader to become familiar with Ulla and her life first. Although an orphan, she's not to be pitied and actually has a very lovely situation...which I found refreshing. It sets the foundations for a rich series.

The introduction of the modern human world kind of threw me for a moment. The first chapters have Ulla living among the other trolls (which has a very normal, human atmosphere), but then, mentions of McDonald's and shakes suddenly came in. It created a surprising world, and that's not bad. While the modern world is there, it dangles more like a shadow on the sidelines and never really touches the tale in this first book. It will be interesting to see if that remains the case in the rest of the series. But the idea definitely makes the characters easy to relate to and brings familiar items like internet although the setting is actually heavy on the fantasy end.

Ulla's past and the secrets it brings with it are the main tension drivers in these pages. While there are a few light action scenes (and I do mean light), the pacing in this one is driven by Ulla's research and, even more, by those she meets. Something is always happening, which made me constantly curious as to what would happen next. But there were moments where the pacing slowed a bit, and I found myself breezing over a few paragraphs, or a page or two. Still, I didn't want to lay the book down either because I was very curious as to what Ulla would discover next.

The characters are rich in this book, which is probably what made it such a lovely read. It's clear that not everyone can be trusted, even though it isn't obvious yet who Ulla should really beware of. But each character has their very own personality and quirks, making it easy to grab a few favorites and be unsure of several others. In any case, there is a lot to come and it appears that it will be quite the adventure with all sorts of surprises.