Review: The Girl and the Witch's Garden by Erin Bowman 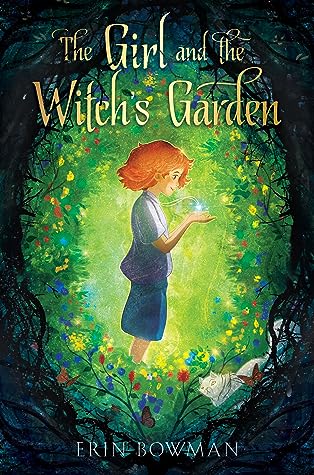 Mallory Estate is the last place twelve-year-old Piper Peavey wants to spend her summer vacation. The grounds are always cold, the garden out back is dead, a mysterious group of children call the property home, and there’s a rumor that Melena M. Mallory—the owner of the estate and Piper’s wealthy grandmother—is a witch.
But when Piper’s father falls ill, Mallory Estate is exactly where she finds herself.
The grand house and its garden hold many secrets—some of which may even save her father—and Piper will need to believe in herself, her new friends, and magic if she wants to unlock them before it’s too late.


In a mix, which somewhat reminds of The Secret Garden and Miss Pergine's Home for Peculiar Children, this is an adventure packed with magic and friendship.

Piper hasn't seen her mother since the divorce, despite the fact that her mom still lives with her grandmother on the mysterious Mallory Estate. All of this is fairly fine, until Piper's father falls ill with cancer, and she moves in with her grandmother while he undergoes treatments. She's met with a shocking surprise, not only does her mother dislike her (for no apparent reason), but her mother has adopted several other children instead. With her grandmother out of the house, and the other children seemingly possessing magical talents, life begins to get strange. Soon, she finds herself wrapped up in a mountain of secrets...many which shouldn't even be possible.

This is a solid, fun, fantasy read for kids, where magic abounds and secrets lay lurking behind every twist and turn. It's not as carefree as the cover might suggest but carries weighted moments and dark mysteries. But with these characters, it's a worthy adventure. Piper is obviously out of her comfort zone and has a lot to learn and deal with. But she has the personality which makes it easy to root for her. The other children at the Estate stretch over a nice variety of quirks, making each one a treat in their own way. Some are easy; others are not. It's a lovely mix.

Mystery and secrets fly as imaginative as the magic. The garden is a wondrous and perfect place to hold at the center of the tale. But then, there are all sorts of surprises, which keep these pages turning. The writing is just right for the age group, and while I did find that the first chapters jumped into things a bit quick (leaving getting to know Piper a little better first behind), the start does dive right into the action and capture attention. I was a bit disappointed with the mother's character. Her meanness to her own daughter seemed to come out of nowhere and held on without explanation. Still, it's a nice read and definitely worth picking up.

Erin Bowman is the critically acclaimed author of numerous books for teens, including the Taken trilogy, Vengeance Road, Retribution Rails, and the Edgar Award–nominated Contagion duology. The Girl and the Witch’s Garden is her middle grade debut. A web designer turned author, Erin has always been invested in telling stories—both visually and with words. When not writing, she can often be found hiking, commenting on good typography, and obsessing over all things Harry Potter. Erin lives in New Hampshire with her husband and children.

Email ThisBlogThis!Share to TwitterShare to FacebookShare to Pinterest
Labels: Erin Bowman, The Girl and the Witch's Garden