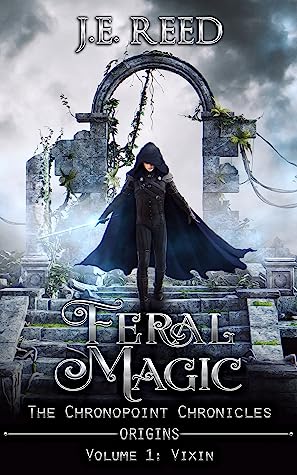 A deadly race for survival. Not everyone will win.Vixin isn't her real name and this isn't home. Unlike most girls her age, Vixin never found herself fascinated with pretty dresses or shoes. She much preferred the feel of a blade in her hand or the rush of the kill while hunting. But that was before this world. Now those skills are the only thing separating her from predator or prey.Thieving isn't exactly what she had in mind, but when Vixin runs across a small band she joins them, her attention shifting from survival to the young man leading their troupe. But death lingers and what started as a fun endeavor quickly turns her into the hunted.With new allies, Vixin is forced to implement everything her father taught her, not only to keep herself alive but her newfound friends as well.Can Vixin learn to control her magic and work with a team or will they all be added to this world's ever-growing body count?Feral Magic is the first spinoff from Reed's gripping Chronopoint Chronicles YA/NA fantasy series. If you like strong heroines, fast-paced action, and unique magic, then you'll love J.E. Reed's thrilling tale.This book can be read as a standalone.

A fierce, gamer world comes to life in a mixture of science fiction and fantasy in this fast-paced tale.

Vixin wakes up to find herself in the middle of a forest. Alone. Although trained by her father for survival since birth, he's never left her side. But not only is her father missing, the world is one which she doesn't recognize. After rescuing two boys from an attack, she decides to raid a settlement for much needed supplies but finds herself caught up in a larger group, which planned the same thing. These claim she's caught up in a game, one which can only end when someone makes it to the last level and wins. But not only does the game hold extreme dangers, the other players are just as deadly. Add the sudden influx of magic, which she needs to learn how to control and emotions for the head of the group, which she doesn't understand, and the game becomes much more complicated that it first appears.

Vixin is a pure, kick-butt heroine, who is a force not to be ignored, and when magic is added...hers, of course, exceedingly strong and easy for her to control...she's downright deadly. Her attitude matches this, thanks to the fact that she was raised alone by her father and had little outside contact. So, she's a bit snarky, thinks very highly of her skills (and rightly so), and would be a bit intolerable if it weren't for her hidden heart of gold...which she hates to admit to. Her love interest is the exact opposite. He might be a deadly force all on his own, but his eyes are on helping those who need help. The contrast between the two causes high tension and sparks to fly, which promises to make an exciting mix and the romance front for this series.

Outside of the romance, this tale packs tons of fight scenes. It's a deadly world and the author keeps it that way most of the way through. The action is well described and makes it hard to put the book down, since something deadly is bound to pop up just around the next bend. So, action fans, this book will fulfill your desires on that end.

While the romance is strong and the action pulls from one scene to the next, the other aspects paled a little in comparison. The world building, description wise, is well down. It's a treat to head through the forests and raid the settlements or hide in the dark places right along with the heroes. But the background behind the world and the characters is missing. Vixin pops up in the first chapter, but we learn very little about her other than that she's kick-butt and raised alone with her father. The other characters don't hold much more depth. It's also not clear why they are in a game, how they got there, what the purpose is...nor are they concerned about it. Vixin isn't even really concerned about returning to her father. The plot is just as loose. They need to make it through, but it's not clear how or to what end.

Writing wise, the book is well done. The dialogue sits, the scenes sit and the tension is high. It is a fun book to read but simply missed the 'meat' of the tale for me. But those who love action and are thrilled to simply dive into a building romance and follow that the whole way through will enjoy the fun.