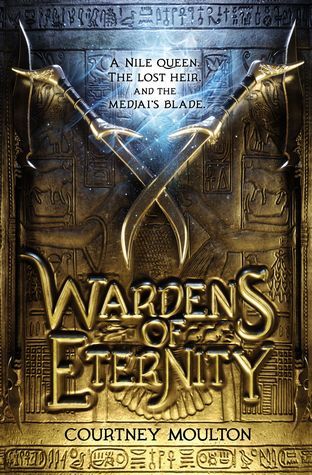 Ziva Ellison has one memory of her parents, made the day they abandoned her on the streets of New York City when she was three years old. They left her with only a memory and a promise that she had a great and terrible destiny.

Fifteen years later, Ziva discovers that destiny includes powers that she doesn’t understand and can barely control. Her magic attracts vicious, otherworldly monsters, and eventually compatriots to help her fight them. Sayer and Nasira know the secrets Ziva doesn’t; that Ziva is descended from Egyptian royalty and in possession of ancient magic passed down from the time of the gods. They promise to teach Ziva to control her magic and to give her the family she’s always yearned for.

But trouble is brewing in the world around them; darkness is descending on Hitler’s Germany, threatening World War II. As the last heir of a revered Egyptian queen, Ziva is the only one with the power to prevent another costly global conflict. As Ziva navigates her newfound abilities and makes a connection with Anubis and other Egyptian gods, the Nazis are hunting for the ultimate weapon, and Ziva has caught their interest.

From Courtney Allison Moulton, author of the acclaimed Angelfire series, comes Wardens of Eternity, an action-packed page-turner that blends history, mythology, and magic, perfect for fans of Rick Riordan and Kiersten White.

Ziva was left alone on a street in New York when she was about four years old, grew up in an orphanage, and tries her best to survive while working a hard job. She's usually hungry, and plays with the idea to use her magical powers to make her life better. When she's attacked by Egyptian creatures right out of the mythology and saved by two warriors, her life takes a massive turn. Soon, she's training to fight off evil and fulfill her destiny before war destroys them all.

I love the cover on this one and the surmise sounded great. So, I was excited to get my hands on an ARC copy. The idea of mixing Egyptian mythology and fantasy into that time of history is a refreshing twist. Throw in the insecurities of a young girl as she tries to figure out who she is and what she should do, and it's a fun read. There's a lot to enjoy, plenty of action, and a world especially mythology fans will enjoy.

I did enjoy the first pages quite a bit, since they do grab up and present Ziva as a wonderful person, who has a ton of bad luck. It's easy to sympathize with her and feel for her. Her powers come a little unexplained, but then the meshing of the two worlds takes a bit to settle in. There are so many aspects to enjoy as magic comes into play along with the monsters, but there are also a few logic burps. Even Ziva's reactions confused me at times. The romance is more instantaneous than I prefer, but it works fine. I did keep wondering what was going to happen next. Some sections flowed rather slow, which might have to do with the very detailed descriptions, at times.

All in all, it's an intriguing twist into history and fantasy, and is a fun read to pick up and dive into.