Review: No Fish For Charles by Tracy Detz 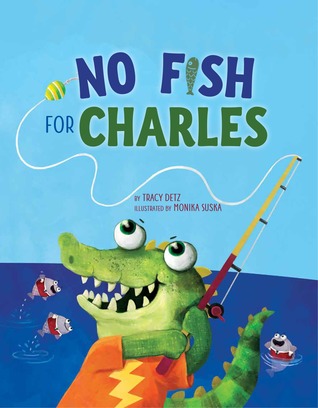 Meet Charles, a big croc who loves chilling on rocks and fishing from the back of his canoe. With dreams of fried fish for dinner, he decides to skip school one day to try his luck and cast his reel. But when Charles encounters a school of clever fish and his outing suddenly becomes anything but chill, he realizes that going to school is always the smartest option.

With fish on his mind, Charles the croc learns an important lesson...and not the easiest way.

Charles is a croc, who would much rather go fishing than to school. With his rod and canoe, he heads out to catch fish for dinner. But instead of fish, he's catching the craziest things. As he hooks stranger and stranger items, it becomes clear that there's more behind his bad fishing than his own lack of skill.

Charles is a fun crocodile with quite the attitude...and he has fried fish on his brain. His determination and tad bit of hilarious wit make him a humorous character. As he starts to catch anything but fish, giggles are sure to spring up. The catch gets sillier and sillier, and it's fun to watch the fish under the water laughing and planning. In other words, smiles are guaranteed.

The illustrations are bright and allow the atmosphere to unfold with all of its silly quirks. Charles is well done, fitting the role perfectly. The text is written in rhyme and flows fairly well. The tale works nicely as a read aloud and will definitely entertain the intended age group while bringing across the message of how important it is to attend school

VALOR AND VICTOR
AND THE ZOMBIES FROM EARTH

Valor from Venus and Victor, his cat,
fly to Earth to cause a BIG spat.
Scaring Earthlings is such a great TREAT
but sadly, they learn, it’s no easy feat.

These humans are dull, they’re more like ZOMBIES,
in love with their phones, and staring at screens!
To scare them the ALIENS devise a plan,
that when thwarted spreads fun across the land.

Complete with whimsical illustrations, this funny and imaginative book is a reminder to kids and parents alike that there is much more fun to be had on the other side of the screen.
on February 26, 2020