Review: When Stars Come Out by Scarlett St. Clair 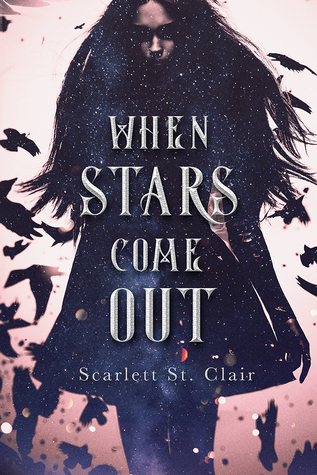 WHEN STARS COME OUT
When Stars Come Out, Book One
by Scarlett St. Clair
YA Paranormal

Anora Silby can see the dead and turn spirits into gold coins, two things she would prefer to keep secret as she tries to lead a normal life at her new school. After all, she didn’t change her identity for nothing.
As it turns out, hiding her weirdness is just one of many challenges. By the end of her first day, she’s claimed the soul of a dead girl on campus and lost the coin. Turns out, the coin gives others the ability to steal souls, and when a classmate ends up dead, there’s no mistaking the murder weapon.
Navigating the loss of her Poppa, her mother’s mistrust, and Roundtable, an anonymous student gossip app threatening to expose her, are hard enough. Now she must find the person who stole her coin before more lives are lost, but that means making herself a target for the Order, an organization that governs the dead on Earth--and they want Anora and her powers for themselves.

This tale dives into the world of spirits, demons and the afterlife with chills, thrills, and a bit of mystery along the way.

Anora and her mother have moved to a small town. Anora attends a new school with the hopes of leaving the past behind. But even the first day doesn't go as smoothly as she hopes. Despite her attempts to stay off everyone's radar, she, as the new girl, not only draws attention but runs across a unsettled spirit, which won't leave her alone. In panic, Anora accidentally releases a power she doesn't understand, but one that has gotten her in trouble before and turns the spirit into a coin. Soon, it becomes clear that the school and the people in the town are not what they seem. Caught up in the middle of a battle between spirits, demons and hunters, she must not only discover the truth about the others and herself, but find a way to stay alive.

From the first page on, this book grabs. The tension starts the second Anora steps into school. It's clear right away that something isn't right, but the author shrouds the details and information into a nicely layered, paranormal mystery which isn't easy to predict. Every predicament leads to a new revelation and sets Anora against more impossible obstacles. It's hard to guess who she can trust and where many of the characters' true loyalties lie.

Magic mixes with paranormal creatures and spirits, creating a rich and dark fantasy world. While the school is set in reality, the mystical world reaches in more and more as the chapters go on. There's high school drama, teenage romance and the usual teacher troubles too, but most of the concentration flips over to Anora's unexpected powers and a threatening war in a fantastical, paranormal world. It's well balanced and smoothly slides the two realities together.

This is not a tale for sensitive readers. The topic of suicide is hit upon, and there are a few violent, bloody scenes. Since especially the first of these topics can be difficult to address, the author takes special care to offer a few personal words of support and offers some information as to where help can be found for those who might find themselves facing this theme.

Fans of spirits, teen romance, strong woman characters all mixed with action, fight scenes and dark intrigue will enjoy this book. It definitely sets a wonderful basis for the series still to come.

Email ThisBlogThis!Share to TwitterShare to FacebookShare to Pinterest
Labels: Scarlett St. Clair, When Stars Come Out