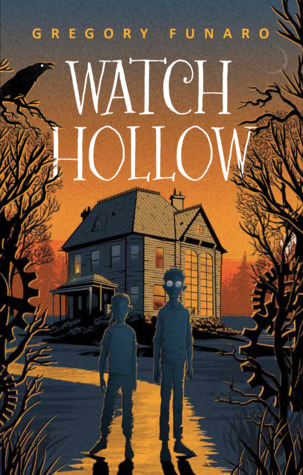 Deep within the enchanted woods in the town of Watch Hollow stands the once-grand Blackford House, whose halls hold a magical secret: a giant cuckoo clock that does much more than tell time. But when the clock’s gears cease to turn, an evil presence lurking among the trees begins to come out of the shadows.
When Lucy and Oliver Tinker arrive in Watch Hollow, they have no idea that anything is wrong. A mysterious stranger has made their father an offer that’s too good for him to refuse. All Mr. Tinker needs to do is fix the clock at Blackford House and fistfuls of gold coins are his to keep.
It doesn’t take long, however, for the children to realize that there is more to Blackford House than meets the eye. And before they can entirely understand the strange world they’ve stumbled into, Lucy and Oliver must join forces with a host of magical clock animals to defeat the Garr—a vicious monster that not only wants Blackford House for itself, but also seeks to destroy everything the Tinkers hold dear.

Jam-packed with imagination, this is a fast-paced adventure with something unexpected waiting around every bend.

Lucy and Oliver's father has been trying to keep his clock business afloat, but especially after the death of their mother, things aren't exactly easy. When a strange car and an even stranger man come into the picture, it appears that, at least, the financial worries might be taken care of for awhile. But the clock Lucy and Oliver's father is to fix is an intricate part of a strange house. Strange animals dwell there, and an evil monster, Garr, is trying to take everything over. Lucy and Oliver find themselves in the strangest yet most exciting adventure ever.

The thing which first struck me about this book was the descriptive writing. Unlike the author's last book, care and time is take to let a perfect setting and atmosphere evolve. While not running into the danger of being overly descriptive, just the right, tiny moments are picked out and brought to life. It sucks the reader right into the store and the characters, allowing them to meet on a personal level right away. And what wonderful characters they are.

While things appear to start out relatively normal, the book soon dives into a vivid and fantastic world. The creatures are fantasy pure, teetering on the border of extreme but never crossing over. It's a delight to meet every one. And, of course, the house itself is filled with amazement after amazement, making every nook and cranny an exciting discovery.

Lucy and Oliver are a great pair. Each has their very own personality and holds their own strengths. As siblings, they work together well and stand by the others side until the very end. Which is good, considering the very sticky, tense and difficult situations they find themselves in.

This is a read for middle graders who love to dive into the realm of imagination and adventure. There's never, ever a boring moment, and it's a world the reader is sure never to forget.